A Nerd Goes to the Detroit Auto Show. Part 2 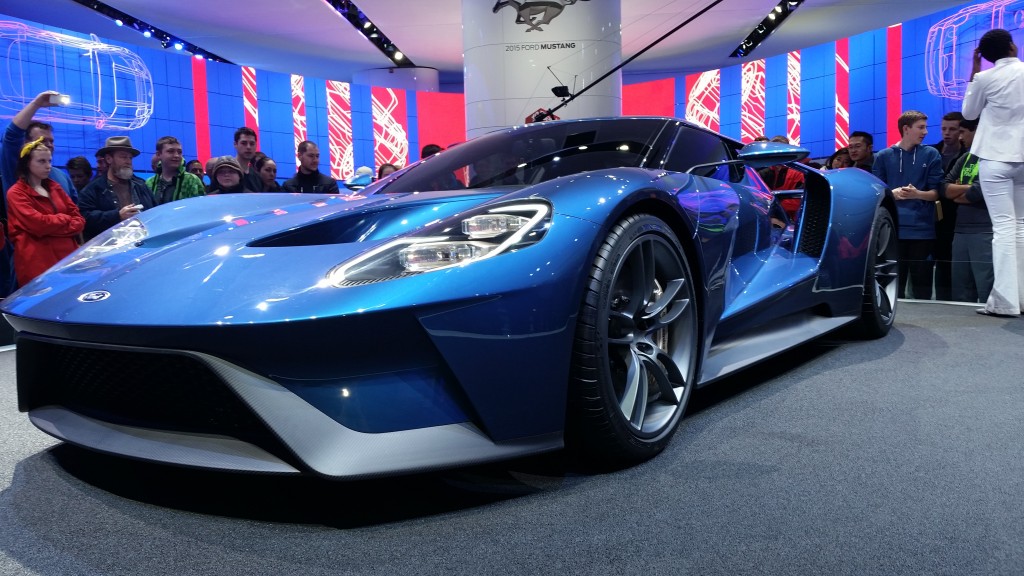 Over the weekend, I was in Michigan for a convention and stole away a few hours on Saturday to head to the North American International Auto Show, which runs through Sunday the 25th. This was my first time attending, and I’m very glad I did. You can find my first post on what Ford is up to here:

Today, I’m leaving the Ford booth to focus on another demonstration that caught my eye. And it’s a doozey. 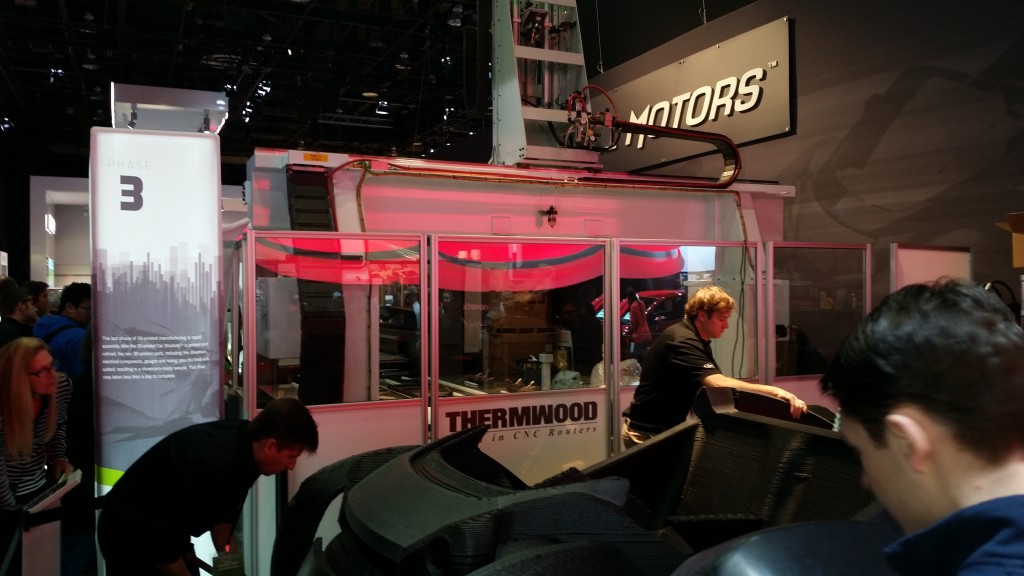 What you’re looking at here is a miniature factory sitting right on the auto show floor. Start up company, Local Motors, brought it with them from Arizona to help the public better understand their manufacturing process. Instead of traditional manufacturing which requires miles-long factories, hundreds of robots, and thousands of workers toiling along assembling tens of thousands of components to make a single car identical to hundreds of thousands of others, Local Motors is going for simplicity. You see, Local Motors is in the business of printing cars. 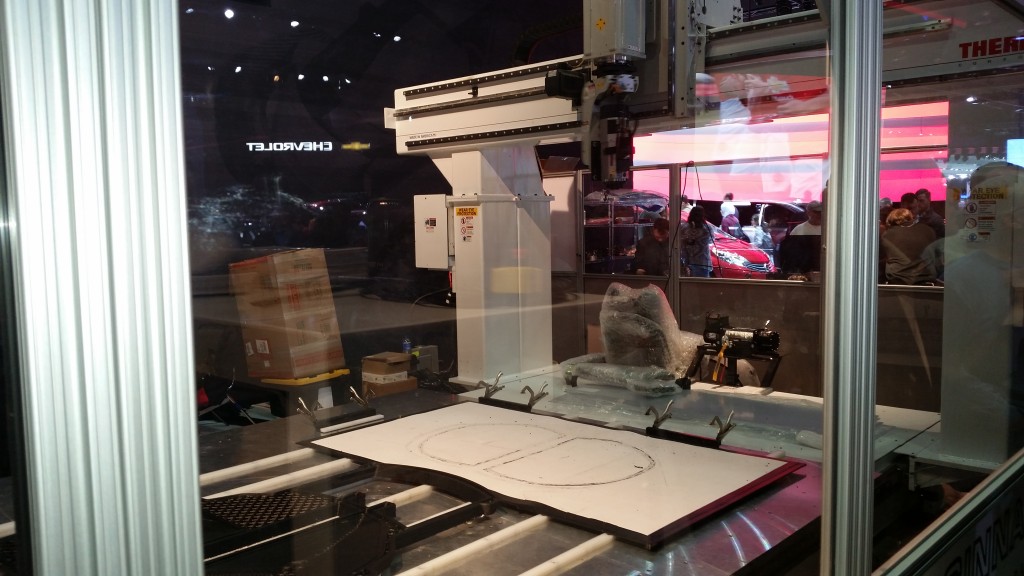 While the big car companies have embraced 3D printing for cranking out study models, prototypes, and even some individual components, Local Motors is printing the entire chassis, body panels, doors, and interior of the car. Only things like the electric engine, suspension components, and batteries need to be sourced from traditional suppliers.

If you’re at all familiar with 3D printing technology, the sort you can find at design studios and even in the home, the process is nearly identical, except much larger. here are several methods of 3D printing on the market, but they all use robotically controlled arms to deposit thin layers of material in the shape of hundreds or thousands of two-dimensional silhouettes stacked one on top of another to create a three-dimensional object. Think of it as the reverse of CNC machining. 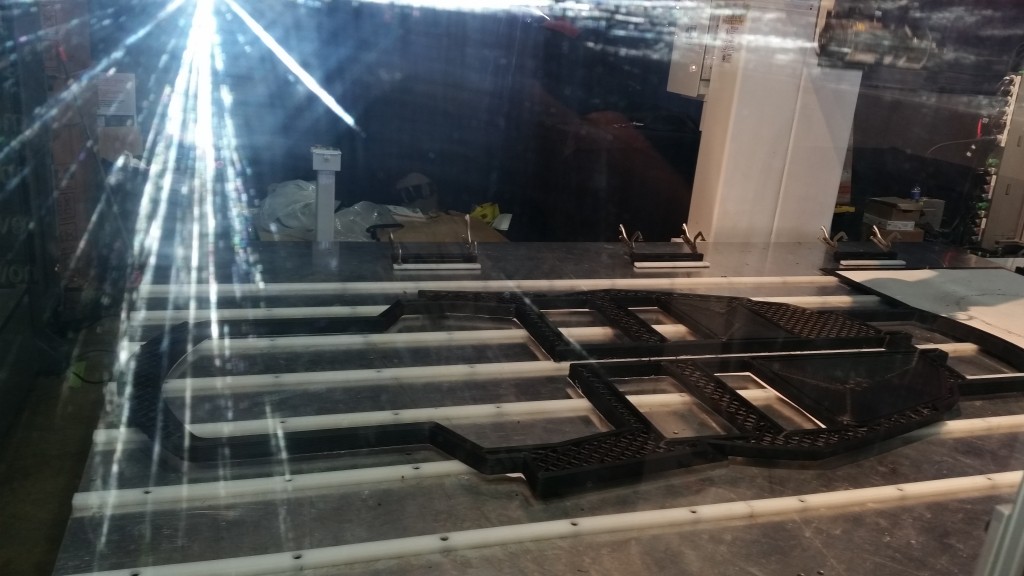 Scaled up, this process is also known as BAAM, or Big Area Addition Manufacturing. Instead of cutting out sheet metal forms, pressing them into shape, then riveting or welding them together, Local Motors uses their giant industrial printer to replace entire assemblies with a single component, drastically reducing the total number of parts and radically simplifying the manufacturing process, while increasing structural integrity and longevity of the parts. 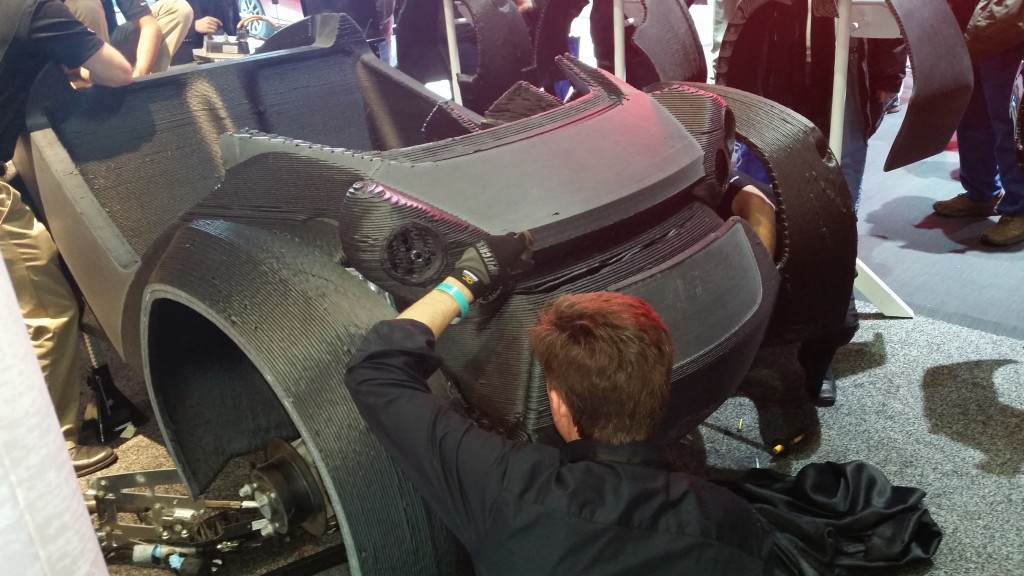 And don’t think that these cars will look like somebody’s giant Lego obsession. That’s just a rough car being test fitted. The body panels and other components then undergo a smoothing and polishing process that makes them visually indistinguishable from the metal, fiberglass, or carbon fiber of more traditional vehicles. Local Motors even left out examples to explain what each stage of the process looks like. 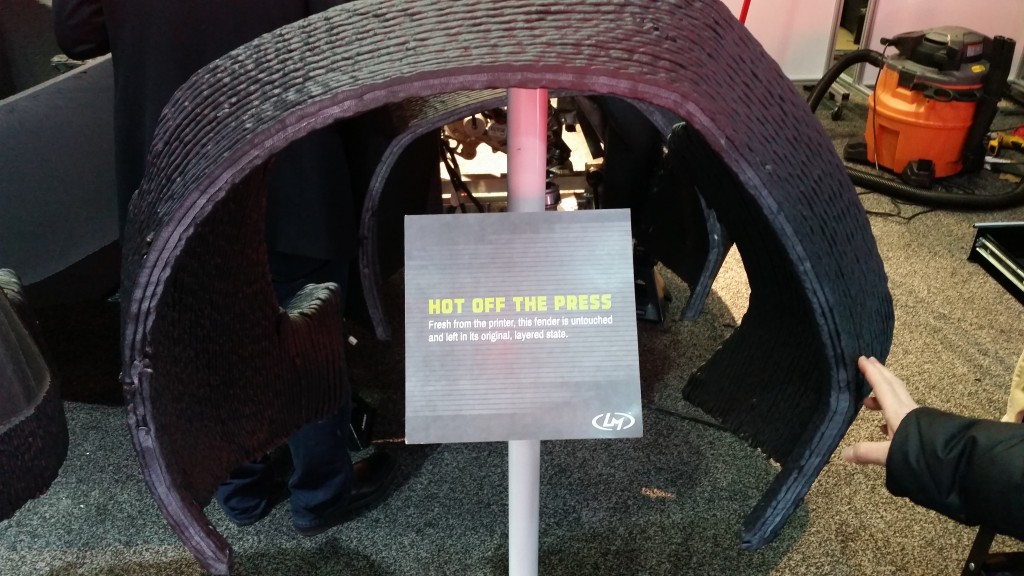 Step 1: Fresh from the printer 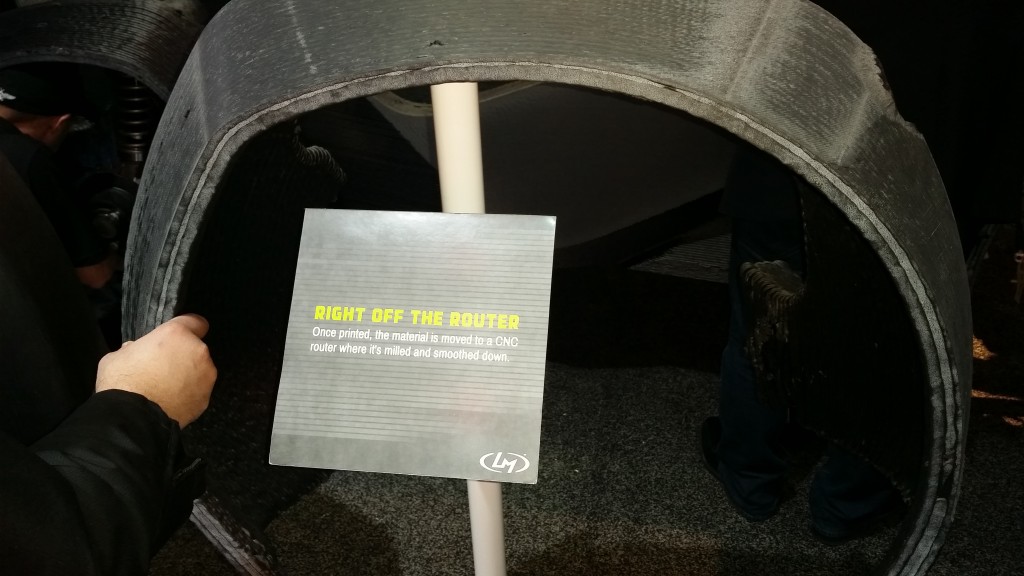 Step 2: Back from a trip to the router 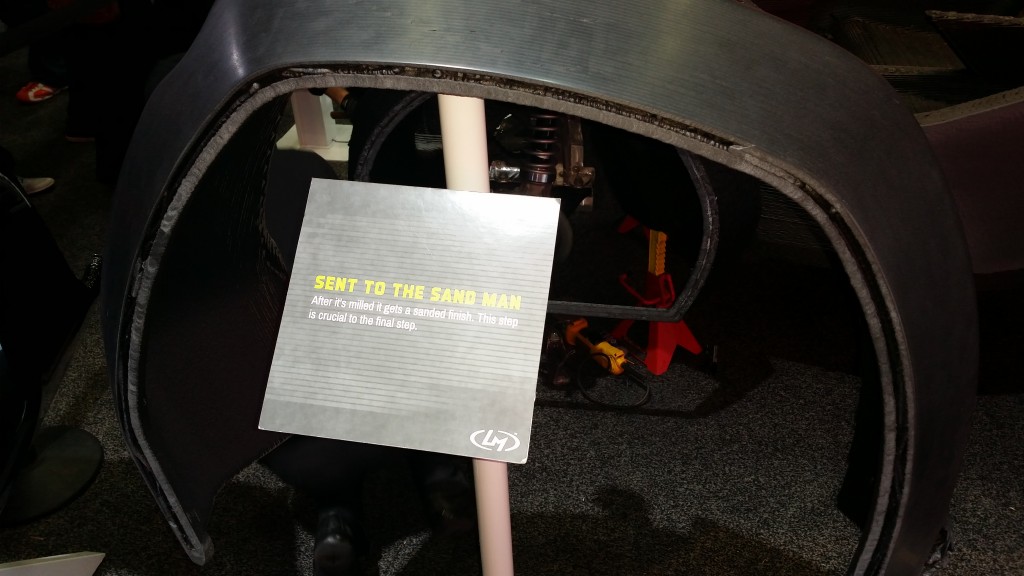 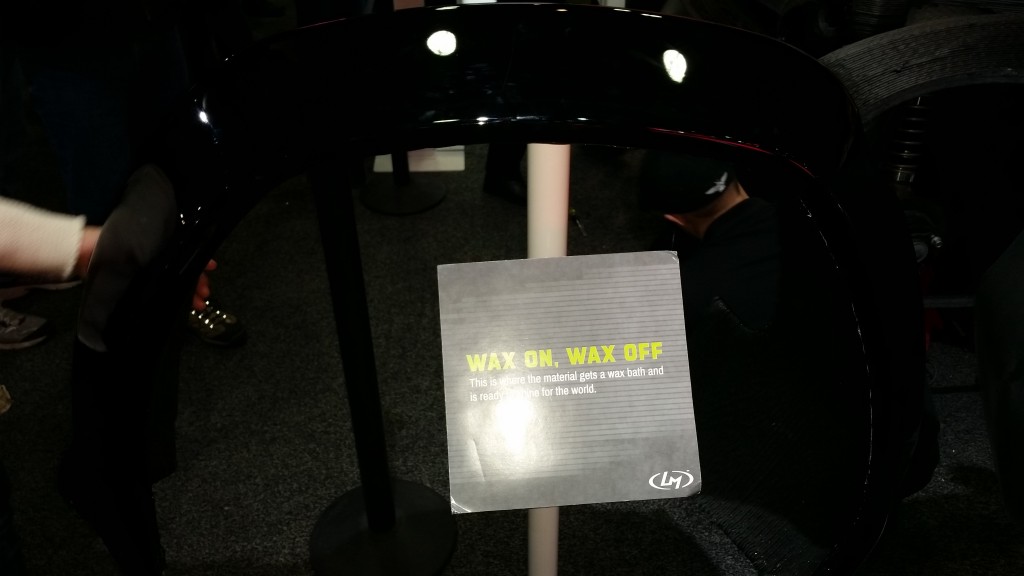 Sorry, my camera phone flash had a little trouble with that last one. Just trust me that the fender looked no different from a highly polished automotive clearcoat, despite being unpainted.

What you end up with is a car manufactured from a single robot that can then be assembled by a handful of technicians in a matter of hours. At the moment, Local Motors says the printing process takes 44 hours in total per car, but they’re goal is to get the figure down to 24 in the coming months. As for the Strati in these pictures, I was told that the plan was to finish printing an entire car, assemble it, then drive it out of the show, making Local the first company to leave NAISA in a car that didn’t exist when the show started. As a demonstration of the power and flexibility of this new manufacturing technique, I think it’s a pretty convincing one. 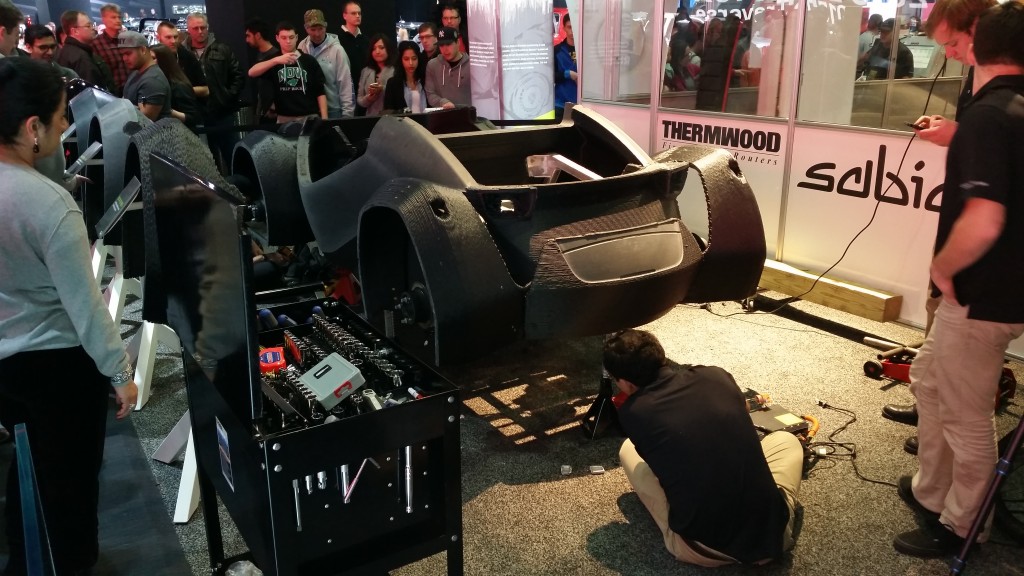 They still have a bit of work left to do, however