A Nerd Goes to the Detroit Auto Show. Part 1 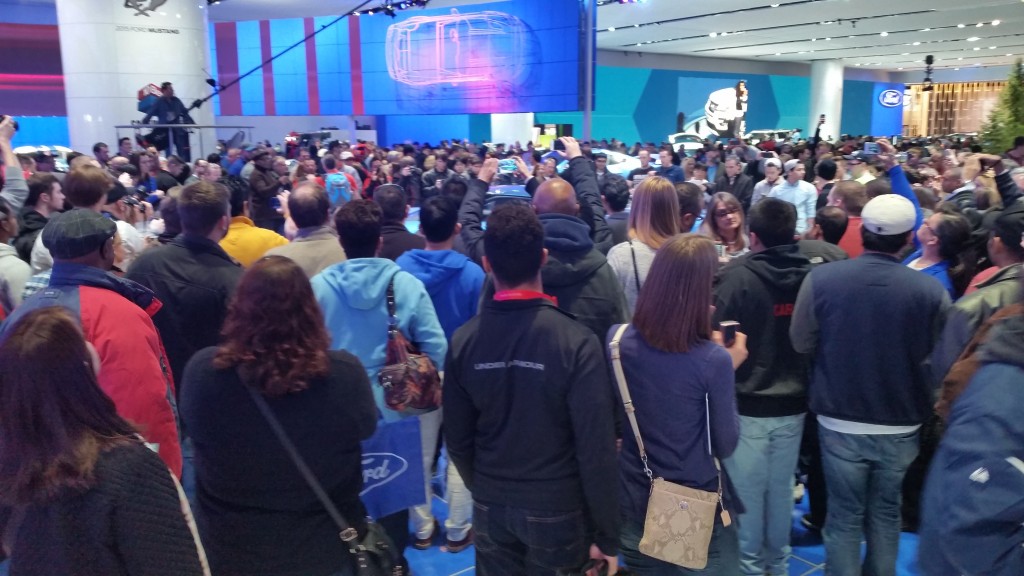 I’m spending the weekend at ConFusion in beautiful Detroit. Over the last three years, it’s easily grown to be my favorite little sci-fi and fantasy con. So naturally, this is a report about the North American International Auto Show, because it’s my blog and stop asking questions.

First of all, let’s get one thing out in the open. I am a Ford fanboy. I’m currently on my fourth Mustang, which I will be trading in at the end of the year for… wait for it… another Mustang. This being the case, I’m not going to even pretend to any sort of journalistic neutrality or factual objectivity. It’s not going to happen. 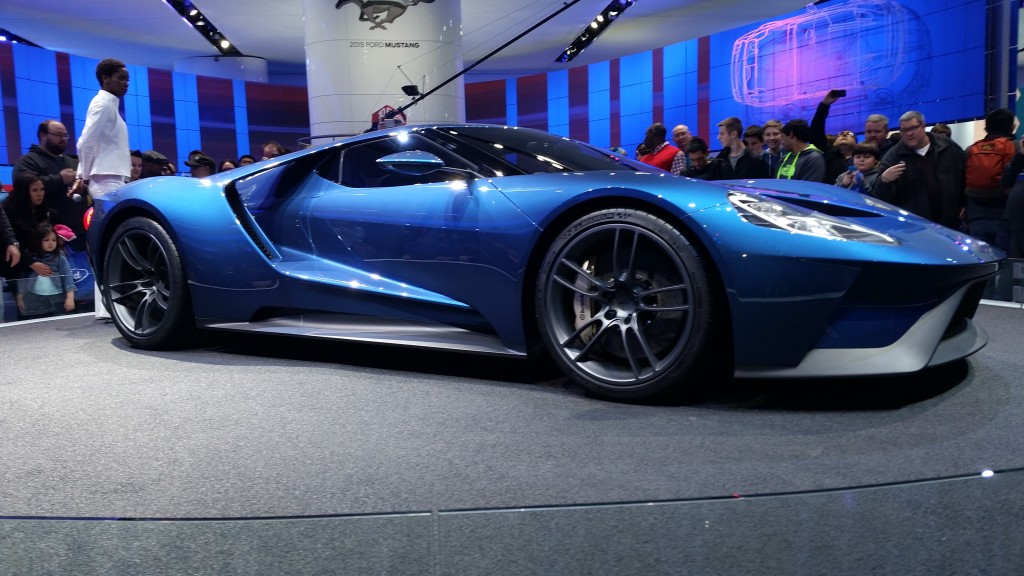 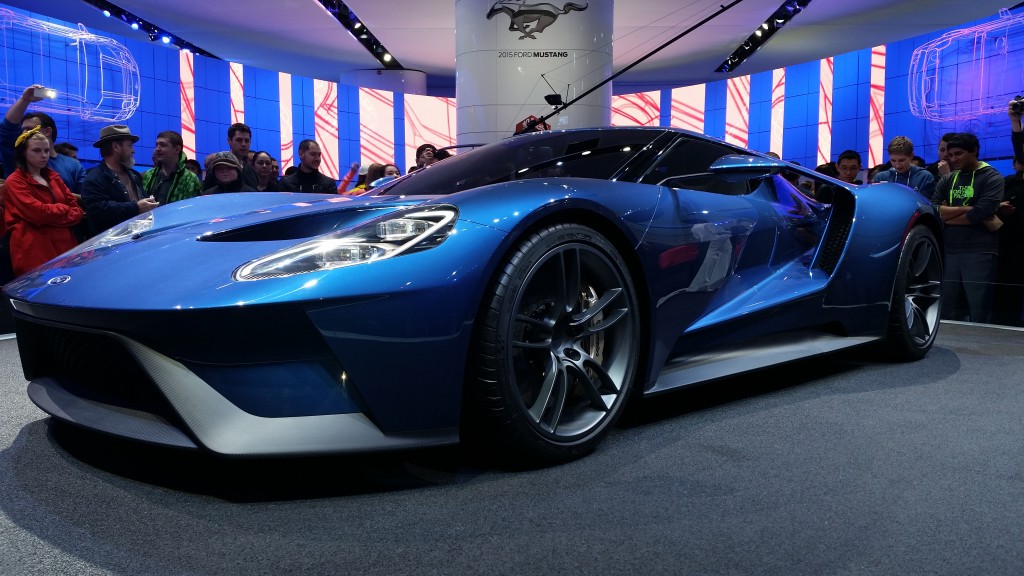 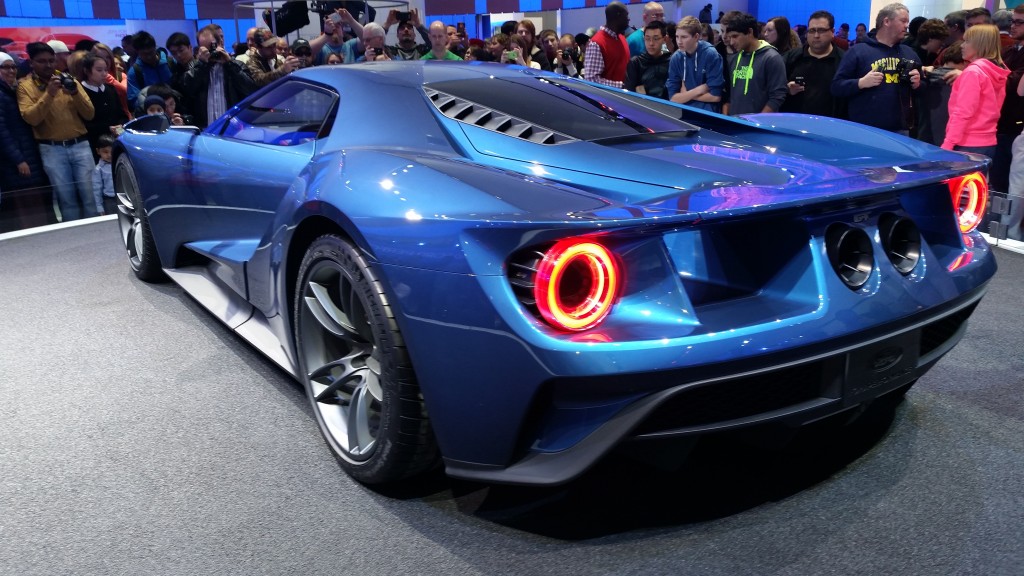 This is not your daddy’s Ford. It is a thoroughly modern supercar designed to take on the best the world has to offer. It shares a name with Ford’s first supercar, the mighty GT40, which was built to slap Enzo Ferrari right in the face at the 1966 Le Mans 24 hour endurance race. That year, the MkII took 1st, 2nd, and 3rd. The cars then went on to win Le Mans in 1967, 1968, and again in 1969, which is not so much a slap in the face as a sack-tap with a branding iron. 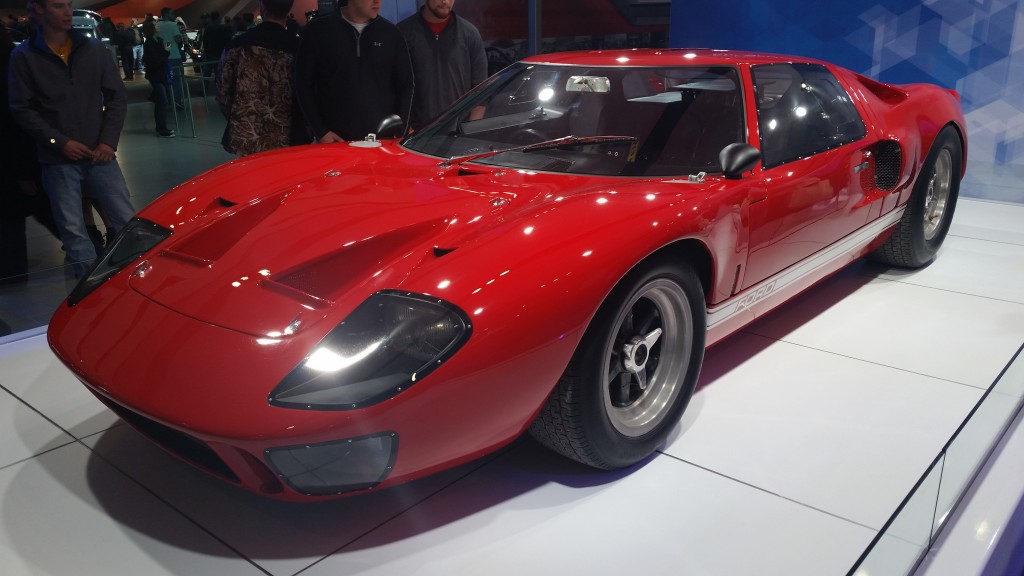 In 2005, Ford brought back the GT with a highly sought after tribute to the legendary racer. The second generation very closely followed the design of the original, while making it a streetable car for the first time with little things like a radio, AC, and power windows. However, as beautiful and capable as the second generation GT was, it wasn’t the dedicated endurance racer its predecessor had been, and it failed to recapture past glories on the racetrack. 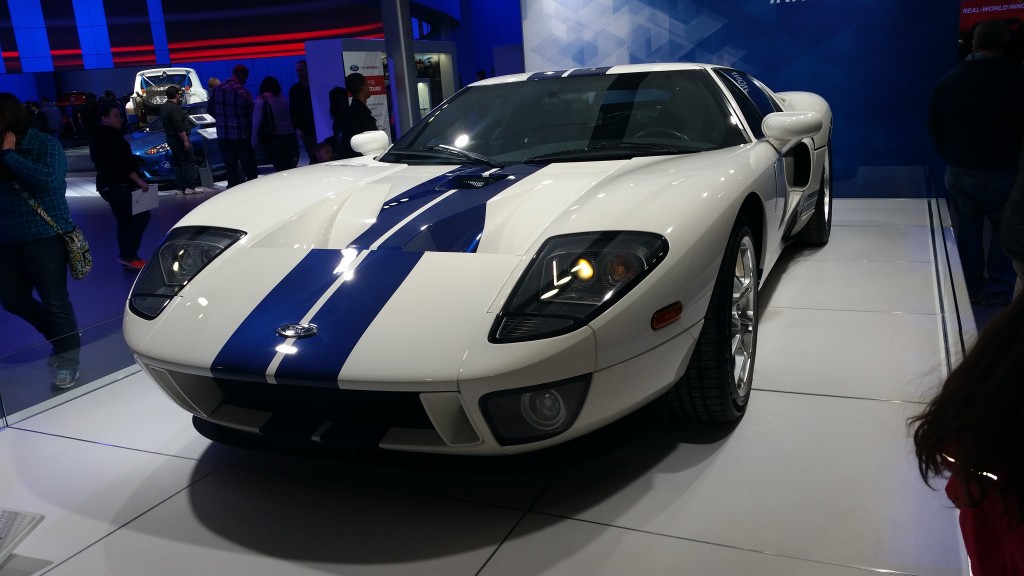 This is not the case with the third generation car Ford just unveiled. Aerodynamically and aesthetically, there wasn’t anything else at the show that could touch it. With its tear-drop shaped cockpit and enormous pass-throughs behind the rear wheel arches, it looks like it’s waiting for clearance from air traffic control to take off and return to its home thirty years in the future.

And while you will hear a lot of belly-aching from old school purists about its 3.5 liter, twin turbocharged V6 engine replacing the 5.4 liter supercharged V8 of its predecessor, ignore them. The power plant inside that gorgeous fuselage is based on an already proven race engine that will deliver over 600 horsepower while not only being lighter and smaller than the V8 which lets the rear fuselage taper down to reduce drag, but its smaller displacement will allow the new car to compete in a wider field of classes on the racing circuit. 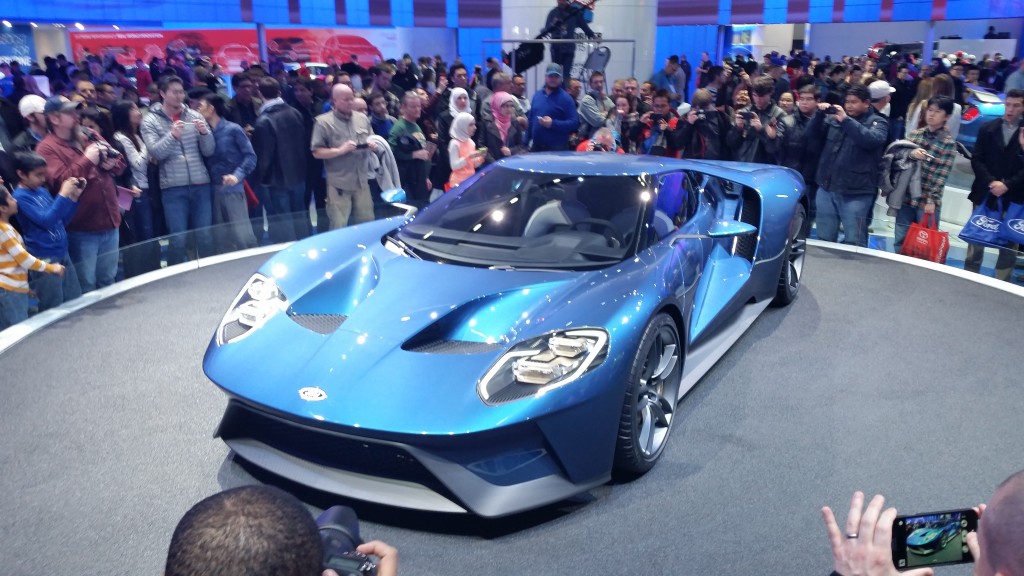 It runs on Corvette owners’ tears.

This car, then, was not built out of nostalgia. It is not an homage to past glory as the last generation car was. Instead, it’s a promise to all of the devotees out there that Ford once again aims to not just slap Ferrari, Lamborghini, and Porsche, but take their lunch money everyday for a month, save it up, treat their mom to an evening out on the town, then get her knocked up and become their step-dad just to really drive home the point of who, exactly, is in charge around here.

And it wasn’t the only bit of Ford Performance goodness to find itself on a giant Lazy Susan. But before we get to it, first we need a little history lesson about the one true pony car, the Ford Mustang.

You see, for the first half-century of the Mustang’s existence, (save for the 2003-04 Cobra) all Mustangs were fitted with what’s known as a solid live axle, which was nothing more than a great honking steel sewer pipe that ran from one rear wheel to the other. Now, solid live axles have a couple of advantages over other systems. They are lighter, less complex, cause less parasitic power loss, and are far cheaper to manufacture. But what really kept them fitted to the Mustang for decades longer than nearly any other car was the fact they provide better straight-line acceleration than other options. It is for this reason almost exclusively that traditionalist Mustang owners, who can often be seen at the local quarter mile drag strip on the weekend, successfully lobbied Ford to hold onto the antiquated technology long after the rest of the automotive world had moved on.

But the very thing that made the Mustang so good on the drag strip is also what made it so bad at nearly everything else. You see, with a solid live axle, the rear tires are connected. What happens to one, happens to the other. So when the left side of your car hits a bump, the right tire effectively hits the same bump. This is not good for going around corners or maintaining traction. But there is a solution, and it’s called an Independent Rear Suspension. 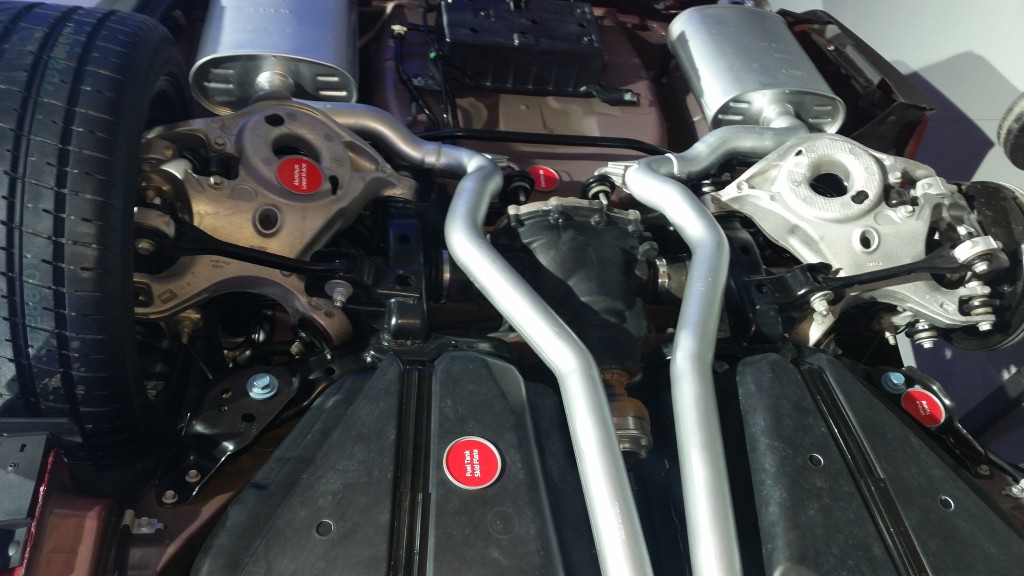 An IRS on a 2015 Mustang Ford very helpfully tipped over for us.

The IRS solves the handling problems inherent to a solid live axle by removing the axle entirely so the wheels, as the name suggests, move independently of each other. This eliminates the issue of bumps, while also allowing the rear tire on the outside of a corner to bite in at a steeper angle as the suspension travels upward as compared to the tire on the inside, drastically improving grip on the pavement and allowing the car to turn that much harder before centripetal forces cause the rear end to spin out in what’s called over-steer.

And after fifty years of pony cars, Ford has finally decided to ignore the traditionalists and move into the 21st century by adopting an Independent Rear Suspension. Starting with the 2015 models, the Mustang has finally left the live axle in the dustbin of pony car history along with leaf springs and drum brakes, and I couldn’t be happier about it.

Which brings us to the other hotly anticipated car from Ford; the rejuvenated GT350R. Like its big brother, the now out of production GT500, the 350 is based on a standard Mustang chassis with gobs of bolt on upgrades that turns a good car into a great one. But unlike the GT500, (which like most muscle cars fitted with a live axle was very good at turning rear tires into clouds of toxic blue smoke but handled like a pregnant sperm whale), the GT350 was designed from the onset to tackle the best European performance coupes from BMW, Mercedes, and Jaguar and teach them a thing or two about going around a racetrack.

Hi. I’ll be sliding your nose over to the side of your head today.

The GT350R is meant to be a track-day monster, sheading almost 200lbs of unnecessary weight by getting rid of such luxury items as the radio, rear seat, sound insulation, and stereo system, then adding in lower, tighter suspension components, lightweight carbon fiber wheels, and a more aggressive aerodynamic package to increase downforce. 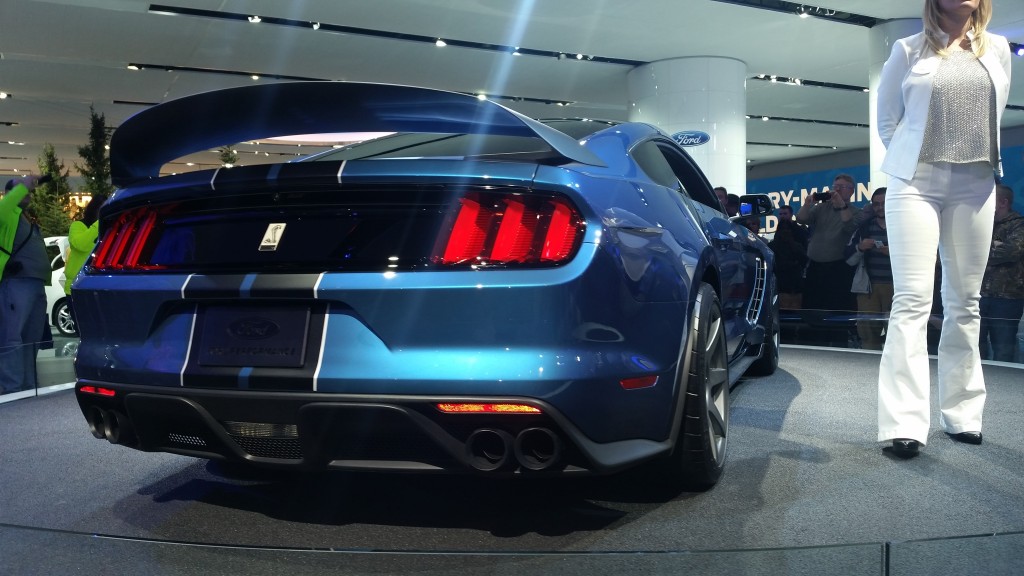 Starting price is expected to be around $70k. If the “R” is too racy for you, the provincial GT350 can be had with four seats for the kids and a radio for you to listen to NPR on for $50k. 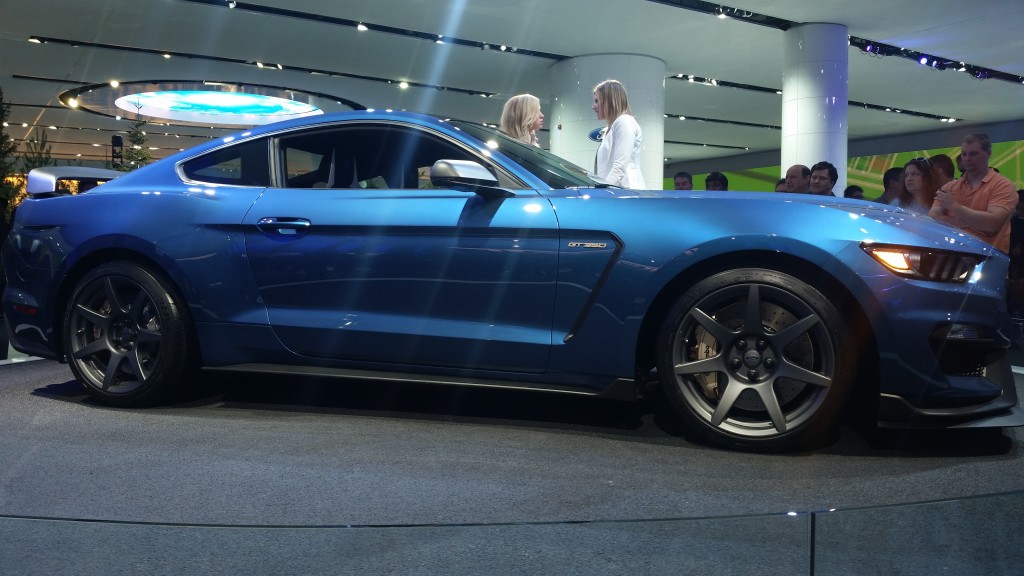 But who would want to put kids in this thing?

That does it for the Ford commercial. My next post will include all of the other cool things I saw at NAIAS, including photos of an entire car being 3D printed right there on the show floor! You won’t want to miss it.