After the Draft: The Contract 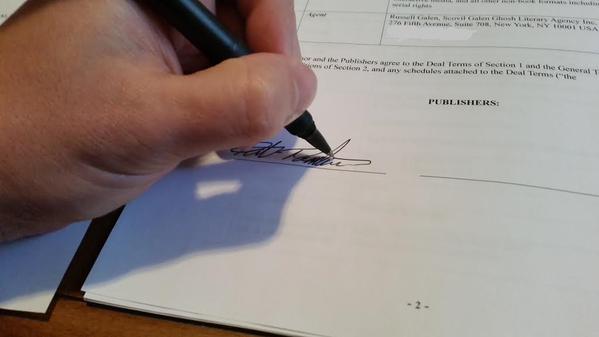 So, you’ve spent years writing hundreds of thousands of words, dozens of stories, and probably a couple of trunk novels you’d rather not talk about. Like ever. And after all that, you’ve finally written a novel that isn’t complete dreck. Your beta readers even seem to like it. You’ve gone through a couple of rounds of rewrites to smooth out the rough edges.

Well, the first big question most authors are asking themselves these days is whether to go with “traditional” publishing or self-pub. I’m not going to get in the middle of that argument. There are pros and cons of each, and I know people who have found success through both paths. Personally, I decided to go the traditional route, because I believe it will give me more time to write. Maybe I’m wrong, we’ll just have to wait and see.

But, if you’re like me and decide to go traditional publishing, or even a hybrid of the two, the next big question you’re going to ask yourself is whether or not you should pursue an agent. Again, I’m not going to replay that argument, and there are plenty of examples of unagented authors succeeding in publishing. But again, I decided to go the agent route because I felt a good agent would afford more opportunities for my book to be seen by the decision makers.

And as anyone following the blog already knows, not only did I land a very good agent, but he in turn sold my first book and a second one within a few short months.

“But why should I give somebody 15% of my hard earned money?” you might be asking. Well, the answer to that came to me when I saw my copy of the actual contract I was going to sign.

Ask yourself a few questions. What do you know about Audio book royalties? eBook pricing? How long should your publisher be given to sell foreign language translations before those rights revert back to you? Is it better to sign a multi-book deal or a single book deal? What is a fair advance? What do you know about negotiating volume-based royalty bonuses? What experience do you have with merchandise and TV/Movie adaptation rights?

If you’re like me, the answer was “Fuck all.” A book contract is a very complex document with a dozen or more moving parts, any one of which has the potential to greatly impact your bottom line. As debut authors, most of us simply won’t have the experience or knowledge base necessary to know what fair terms are. Unfortunately, the actual business of writing isn’t something that’s taught at the majority of writing MFA programs, workshops, or writer’s retreats. And even if it was, the reality is the publishing industry is in such a state of flux right now that what was true five years ago has been tossed out the window.

But while aspiring and debut authors don’t have that knowledge, agents do. It is literally their job to know. So the math for me was pretty easy. I could have 100% of a much smaller number because the publisher was able to take advantage of my naiveté, or 85% of a much larger number because I had someone with both the knowledge of contemporary publishing contracts and a monetary interest in seeing that I made the most money I could.

Looking back at the contract, I think I made the right choice.

In the final tally, we signed a two-book deal with Angry Robot, with an option on a third should THE ARK and TRIEDNET’S FORGE prove popular enough to warrant rounding out the trilogy. I accepted a slightly smaller advance than the average, but retained audio rights on the advice of my agent. I’m happy with that decision because it can mean another sale later and multiple income streams going forward, something that wouldn’t have occurred to me without his guidance. Additionally, my royalty rate gets a boost if certain sales volume targets are met, something else I wouldn’t have known to ask for.

In the end, everyone walked away with a fair deal that gives all parties a chance to make money. No one feels like they’re being exploited or not getting their fair share. That’s why I wanted an agent.

I hope that helps. Soon, we’ll get into the fun stuff. Working with an editor for the first time, rewrites, and cover art. See you then!