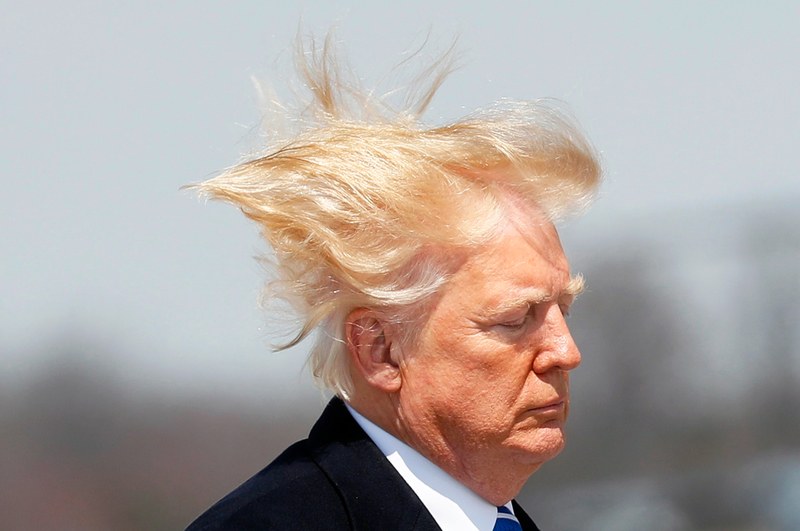 What a year this week has been, and it’s still only Friday.

Then on Tuesday, the New York Times dropped a bombshell report that came as a shock only to people who haven’t been paying even a shred of attention. Yes, turns out Trump lost an average of one hundred and ten million dollars per year between the mid eighties and mid nineties for a total of over a billion dollars of negative income. For comparison, it would take the average drunken sailor on shore leave after a six month WestPac more than a thousand years to blow that much money on booze and women of negotiable affection. Indeed, according to IRS documentation, Trump was one of the single largest individual failures in the entire country over this ten year span of time.

Nor are the revelations about Trump’s laughably pathetic business acumen going to stop anytime soon. Since Trump is a well-known among American banks as a default risk because, again, he is an abysmally terrible businessman, the only western bank that has been willing to loan to him for the last fifteen plus years has been German-based and Russian-money-laundering-scandal-plagued Deutsche Bank. Whelp, ze Germans are busy spilling the beans on all of their shady loans over the last decade to the New York Attorney General’s office as they build a case against the Trump Organization. Speaking of New York, on Wednesday, the NY state assembly voted to advance a bill that would legalize the release of Trump’s personal and business state taxes to the US Congress, forms which would very closely mirror Trump’s federal taxes Treasury Secretary Steven Mnuchin broke the law to keep secret from the House Ways and Means Committee earlier in the week, an act that may land him with a Contempt of Congress charge. More on that in a bit.

But none of that is the biggest news to come out of the Executive Branch over the past week. That dubious and deeply worrying honor goes to one William Barr, the toadie Trump hand-picked to replace Attorney General and racist Kebbler Elf, Jeff Sessions after he made the cardinal sin of recusing himself from the Russia investigation following the recommendation of an ethics review.

First, a little background. This is not Attorney General Barr’s first turn in the office, but his second. His first stint as the nation’s top law enforcement officer came during the George H.W. Bush administration, where he immediately set to work doing the White House’s bidding by recommending pardons for nearly everyone involved in the Reagan era Iran Contra Affair, hoping to bury the scandal and help those responsible avoid accountability once and for all.

Does that sound even vaguely familiar? Because it should.

You see, Barr auditioned for the job of Trump’s new and improved AG when he penned a memo nobody asked for or wanted arguing that it’s actually legally impossible for a President to obstruct justice, and that Mueller’s entire investigation into Trump’s motivations for firing FBI Director James Comey, intimidating witnesses like Michael Cohen via Twitter, and dangling pardons to the traitor Paul Manafort, was therefore entirely invalid, even frivolous.

To say this view of an infinite Executive branch unburdened by the restrains of the law and justice is an extreme position is to torture every word present in the sentence. Barr’s memo is not just far to the right of every serious Constitutional scholar, judicial opinion, and American history, it’s out past the Keiper Belt and charging up for a jump to warp speed out of the solar system. Anyone who lived through or studied anything about the Watergate scandal that took down Richard Nixon knows that one of the articles of impeachment against him was indeed Obstruction of Justice in the aftermath of the DNC break in and subsequent cover-up.

Yet even after putting his insanity to the page, practically begging to be picked for the job of covering up for yet another criminal Republican administration, Barr cruised to confirmation, and then indeed tried to exonerate Trump of Obstruction in the court of public opinion. Which is why on Wednesday, after he refused to turn over the unredacted Mueller Report to Congress, a report he deliberately and maliciously lied about the contents of to the American people just weeks before, the House Judiciary Committee took the drastic but entirely necessary and justified step of referring the Attorney General of the United States to the full House on the charge of Contempt of Congress for only the second time in our history.

The first time came a few short years ago when the GOP led House held Obama era AG Eric Holder in contempt for refusing to turn over certain documents related to their probe into the Fast and Furious scandal. That investigation dead-ended with exactly no charges or indictments, no arrests, and no convictions of anyone in the Obama administration, largely because the scandal was a conspiracy theory ginned up by the far rightwing blogosphere from the start, and their probe into it was nothing but cynical political theater much like the ten Benghazi hearings.

Mueller’s Trump/Russia probe was anything but cynical theater. Instead, it not only proved beyond any reasonable doubt that Russia actively interfered in our election with the goal of installing Trump and defeating Clinton, but that it made numerous attempts to infiltrate the Trump campaign and bring Trump associates into the conspiracy, attempts that were positively received by Trump’s campaign manager, personal lawyer, son in law, eldest son, and several other key members working for the campaign in both official and unofficial capacities, such as Roger Stone.

Mueller’s investigation by contrast, which was started by Republican Rod Rosenstein, incidentally, lead to over one hundred criminal charges against thirty-four people and three companies, eight arrests, seven convictions and counting, and as many as fourteen new criminal investigations into related matters that have now been handed off to other prosecutors.

By the numbers, the Mueller probe was the most successful and consequential Special Counsel investigation in American history, uncovering a vast, international web of criminality that ensnared some of Trump’s closest advisors and confidants. Which is exactly why Barr was brought in to lie about and bury its findings. So flagrant were Barr’s misrepresentations of the report to the American populace, that Mueller himself, who has a history of being tight-lipped and rigidly respectful of the chain of command, wrote a letter to Barr personally expressing his displeasure at how his new boss dishonestly presented his team’s findings and sowed confusion among our citizens.

Barr has made a career out of lying and burying bodies, but he’s not the one at the center of the web giving the marching orders. Instead, it’s Donald Trump who has ordered Barr, Mnuchin, former White House Counsel Don McGahn, and other officials to violate Congressional subpoenas for documents and testimony, in effect obstructing justice to conceal his earlier obstruction of justice in a layer cake of criminality, like if Inception had been written by the world’s dumbest mobster.

Donald Trump was never President, not for one second. His “election” which remember he fucking lost by three million votes, was rendered illegitimate by not only Russian interference, but his campaign’s own complacency and encouragement of that interference. “If it’s what you say, I love it,” Donny Glue Eater said instead of reporting to the FBI. Thanks to nearly two years of work by Mueller’s team, these are now established, undeniable facts, even if they were unable to meet the strict legal standards of evidence that would have supported conspiracy charges (which I’m sure had nothing to do with members of Team Trump destroying evidence). In Trump’s continued efforts to conceal not only his illegitimacy as *President, but the ever-expanding dragnet into his decades of financial crimes, he is busy burning down two hundred and forty plus years of our institutions, checks-and-balances, and shredding the Constitution itself by stonewalling Congress in their duty as a coequal branch of government and responsibility to provide oversight.

The danger here is that Barr’s delusional vision of an unchecked executive of infinite power may itself become something of a self-fulfilling prophesy. As many pundits have already observed, the founders envisioned a wannabe tyrant like Trump. But they never imagined in their darkest nightmares a party so dedicated to their own racism and feudalistic class war that they’d actually help a despot dismantle everything they worked so hard to create. The lengths the entire Republican party has gone to bend over backwards for the Tangerine Toddler in his hostile takeover of democracy would be impressive if only any of them possessed a spine. He means to fully consolidate power into the office he stole with Putin’s help, because remaining there indefinitely is the only thing saving him from dying in prison, and he knows it.

We are past the point of a Constitutional Crisis, and have entered a Constitutional Meltdown. The Democratic party in Congress, and by extension every remaining American patriot, must fight tooth and nail, using every means available, to drive back this assault on our republic and our democratic system.

We do not have a President today, and if we’re not careful, we’ll never have another one again.