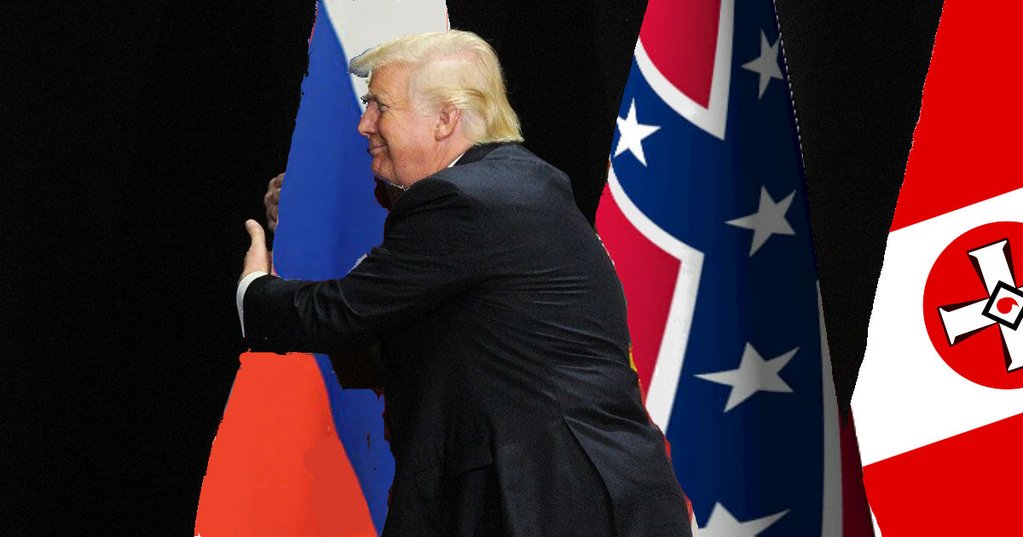 In an interview with Bill O’Reilly that aired before the Super Bowl on Sunday, Donald Trump made yet another spirited defense of his political ally, Russian President Vladimir Putin.

When pressed by the Fox News host over his year-long bromance with Putin the “killer,” Trump pushed back, insisting that there were killers in America as well and that our country was hardly innocent. This rather spectacularly disingenuous bit of false-equivalence overlooks the fact that we try not to reward our killers with high office. Retired General Barry McCaffrey went so far as to say the flippant equivocation was “[T]he most anti-American statement ever made by a president.” Nor was he alone, as Republican lawmakers rushed to distance themselves from Putin’s apologist throughout the rest of the day.

But the overriding question that remains is why the President of the United States is so steadfast and immovable in his support of an illegitimately elected, autocratic… okay, fine so the answer is obvious. But what’s less obvious to people only now tuning in is why this relationship is so troubling. To understand that, you have to know more about the personal and political history of Russia’s newest tyrant.

Vladimir Vladimirovich Putin was born into the Cold War in 1952. He speaks fluent German and from 1975 to 1991 served as a KGB intelligence officer. After the fall of the Soviet Union, he resigned from the KGB and joined the Boris Yeltsin administration in 1996. Only three short years later, Putin became acting President when Yeltsin resigned under a cloud of corruption allegations. At the time, Putin was criticized for shielding his mentor from any investigations or consequences for his graft.

Since then, Putin has alternated between the roles of President and Prime Minister. In 2012, he recaptured the presidency with seventy percent of the vote in an election widely criticized by the international community as undemocratic, including a stinging rebuke from former Secretary of State, Hillary Clinton, which was widely reported to be a driving motivation behind Putin’s cyber-campaign against the DNC.

While in power, Putin has been embroiled in multiple scandals and by nearly constant accusations of corruption, human rights violations, and politically-motivated assassinations.

1. In 2004, Ukrainian Presidential candidate and leader of the anti-Russian opposition party, Viktor Yushchenko, was poisoned during the campaign to unseat Putin’s ally, Viktor Yanukovych in the famous “Orange Revolution.” Yushchenko was visibly disfigured by the poisoning attempt, which tests latter concluded was due to highly-refined TCDD, a truly terrible dioxin. Despite the attempt on his life, Yushchenko recovered and went on to defeat Yanukovych and become Ukraine’s President from 2005 to 2010. He was not shy about accusing Putin’s FSB of being behind the assassination attempt.

2. In 2006, former KGB and FSB agent Alexander Litvinenko was poisoned with polonium-210, a highly radioactive substance that is also incredibly rare. Indeed, Litvinenko remains the only case of polonium poisoning known to medical science. At the time, he was living in England, which had granted him asylum after he fled legal persecution in Russia. On his deathbed, he made international news with information regarding abuses committed by the FSB and the accusation that Putin was personally behind the covert operation to poison him. A claim which British intelligence found credible.

3. In 2012, three members of feminist punk band Pussy Riot were arrested after a performance in the Cathedral of Christ the Savior in protest of leaders of the Russian Orthodox Church support for Putin in that year’s tainted election. They were subsequently tried, convicted, and imprisoned on charges of “hooliganism motivated by religious hatred.” Two of the members served over a year in prison before pressure from Amnesty International and other human rights groups pushed the Putin government to reduce their sentences.

4. In July 2014, Malaysian Airlines Flight 17, flying over eastern Ukraine, was shot down by pro-Russian rebel forces using a Russian-built Buk Anti-Aircraft missile launched from a mobile system that Dutch authorities later concluded had been driven in from Russia the day before, and driven back into Russia after the crash. All two-hundred and ninety-eight people aboard died in the attack. Considering the sophistication of the equipment and training involved in its operation, it is highly likely that Russian soldiers were at the controls when the missile was fired, believing they were firing instead on a Ukrainian military transport plane.

5. In March, 2015, prominent Russian opposition leader and frequent Putin critic, Boris Nemtsov, was murdered in broad daylight near the Kremlin building while walking with his girlfriend. Despite multiple witnesses to the brazen shooting, the case remains unsolved after one suspect confessed only to later recant, and another blew himself up rather than be taken into custody.

6. In late 2016, during the campaign between Donald Trump and Hillary Clinton, which all seventeen of our intelligence services concluded Putin intervened in with the purpose of helping to elect Trump, Christopher Steele, a former agent of British Intelligence originally hired by a Republican-allied Super-Pac to collect opposition research on Trump assembled an explosive dossier that claimed, among other things, that Putin’s FSB had been attempting to groom Donald Trump as an asset for the previous five years. Not only had Russian intelligence attempted to bribe Trump with sweetheart business deals, but had collected kompromat (compromising material) on Donald over the course of several visits to Moscow, including the now-infamous sex-tapes featuring Russian prostitutes and certain bodily functions that are best left undescribed.

7. After the election, former FSB general Oleg Erovinkin, who was widely believed to be one of Steele’s sources for the dossier, was found dead in his Lexus in Moscow on December 26th. Investigations are ongoing, but even Russian state media has called the death a probable homicide.

Erovinkin was a senior aide to Igor Sechin, formerly Prime Minister and currently serving as the head of Rosneft, a state-owned oil company that had been named in the dossier. Steele reported that his contacts in Russian had claimed Putin, through intermediaries, had personally promised Donald Trump a 19% share of Rosneft should he win the election and push U.S. foreign policy towards a more pro-Russian disposition. Rosneft sold off a 19.5% stake through a series of shell companies not long before Erovinkin was found dead. Russia claims the sale was a 50/50 split between Swiss commodities-trader Glencore and Qatar’s sovereign wealth fund, but questions remain.

8. Additionally, since Trump “won” the election, there’s been a concentrated sweep of suspected CIA informants from within the Russian intelligence community. At least four agents have been arrested and charged with treason for providing information to the United States. Whether these individuals were also associated with the Steele dossier is unclear. Whether the Trump administration had anything to do with the release of their identities to the FSB is unclear.

9. Finally, and most recently, fierce Putin critic and journalist Vladimir Kara-Murza is currently hospitalized in a medically-induced coma following acute organ failure. This comes on the heels of a similar incident in 2015, which doctors concluded was caused by a poisonous substance. His wife has since come forward at great risk to herself to publicly accuse the government of once more poisoning her husband.

In all these cases, Putin denies any involvement, despite multiple converging lines of evidence that all point to him as not only the perpetrator, but the primary political beneficiary of the outcomes.

Now, how does this factor into his chummy relationship with Donald Trump? Well, simply put, we have no idea. Several investigations into links and coordination between the Trump campaign and the Kremlin are ongoing, including probes by the FBI and CIA and promised investigations by the Senate and House, but no conclusions have been made as yet.

Nor do we have any useful window into the potential involvements and conflicts of interest Trump’s vast business empire might have within Putin’s sphere of influence, because the President has neither followed through on a campaign promise to release his tax returns after the election, or indeed provided any useful accounting of his business holdings. And as reported by the New York Times over the weekend, we now know that Trump’s promises to divest from those interests were just as empty as the folders full of legal paperwork at his last press conference.

Instead of placing his holdings into a blind trust as a bipartisan panel of ethics experts testified is necessary to avoid violating the Emoluments Clause of the Constitution, we now know Trump’s business interests have been placed in a revocable trust to which he is the sole beneficiary, retains the authority to revoke it at any time, and which is being administered by his eldest son. None of which addresses the underlying constitutional issues presented by his holdings, nor does anything to add any transparency to questions of potential conflicts of interest.

However, what we can note is not only Trump’s absolute, steadfast refusal to say anything even remotely critical of Putin or his methods, but the effects their relationship has had on not only Trump’s policy proposals, but Republican legislation.

First of all, in the run-up to the Republican National Convention, Trump’s camp successfully managed to lobby for including the lifting of sanctions related to Russia’s invasion and annexation of the Crimea from Ukraine and recognize Russia’s claim on the territory into the official Republican party platform.

Trump has made numerous mentions of drawing closer to Russia militarily and using them as a key strategic ally in the fight against ISIS, despite the fact U.S. military analysts have repeatedly warned the Russian military’s involvement in Syria has been entirely focused on propping up the fortunes of their ally in the Assad regime and have contributed virtually nothing to the battle against the Islamic State.

Trump has refused to acquiesce to the consensus findings of the U.S. intelligence community regarding Russian involvement in the election, going so far as to compare them to Nazis when referencing leaks to the media.

For their part, Republicans in congress have taken several unusual steps in recent days that do nothing to alleviate this narrative of collusion and cover-up. Last week, a bill was passed which strips Securities Exchange Commission requirement for oil, gas, and mining companies to report payments to foreign governments or corporations. This coming on the heels of the suspicious Rosneft sale which so closely mirrored what had been promised to Trump should he win. Seriously, who’s that for?

At nearly the same time, Trump’s Treasury Department announced it was rolling back sections of the sanctions Obama instituted in response to Russia’s election interference in order to make it easier for American companies to do business with the FSB.

What does all this mean? It means there’s a very real possibility our president, the leader of the largest economy and most powerful military in the history of mankind, is compromised by a proto-fascist dictator. A man who has proven he’s willing to jail artists, murder journalists and opposition leaders, and even cross national boundaries to directly attack foreign heads of state. A man without scruples or fear, who not only helped to install our President, but holds damaging blackmail material over him, and is using that leverage and fear to bend American domestic and foreign policy to benefit his kleptocracy over our democracy.

Is this true? I have no idea. The real answers will have to be unearthed by journalists with vastly better resources and connections than I possess. But if the old axiom “Where there’s smoke, there’s fire” holds true, then there’s more smoke here than Vesuvius before the eruption, and we’re all in danger of getting burned alive in the coming calamity.

We must act swiftly to uncover the truth.