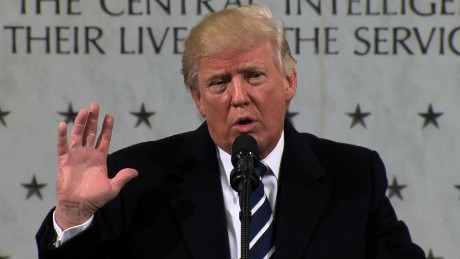 Last weekend, Donald Trump met with members of the Central Intelligence Agency. With the CIA Memorial Wall which honers, excuse me, honors agents lost in the line of duty as a backdrop to his speech, Mr. Trump launched into a rambling tirade against the press, praised himself for winning the election, joked about reinvading Iraq in order to steal their resources, and generally acted like, well, Donald Trump.

Much to the horror and stunned confusion of the actual members of the intelligence community present for this spectacle, Trump’s boasts and barbs were punctuated by laughter and applause emanating from people no one recognized. As CBS and other news outlets later reported, there was a very good reason for this: Donald brought his own laugh track with him. The guffaws and clapping were all provided by a cadre of White House staffers and sycophants which had been brought along specifically to act as the President’s cheering section in order to make it appear the speech was being enthusiastically-received by the very people Trump had referred to as “Nazis” only days before in a tweet about the release about a damaging dossier linking him to a, ahem, stream of unsavory Russian entanglements.

Nor was this the first time Trump employed the tactic. On January 11th in his first press conference since July, (when he publicly colluded with Russia to hack his opponent’s email system, incidentally) the then President-elect stood at a podium next to a table full of manila folders said to contain all the legal paperwork he’d drawn up to divest from his businesses and went on the attack against the press sitting in the room, accusing CNN of “fake news” and refusing to answer questions while the “crowd” roared with approval. Now, it’s been a while since anyone has seen a press conference, however, applause breaks are not a traditional component. And it was a fake as the contents of the stacks of folders the press was barred from inspecting.

I recognize these tactics very well. Indeed, I strive to recreate them. I’m a stand-up comic, you see. Manufacturing laughs have been my bread-and-butter for four years and counting. And I’ve seen this play before, I’ve even used it myself. It’s an old trick among comedians, especially those of us who are still in the building phase of our careers, to bring in a ringer or two to pry open an audience. Family or friends, preferably ones with a loud or distinctive laugh. My friend Jason Punswick’s laugh can be heard from the International Space Station during certain points in its orbit.

Especially at the beginning of a show, audiences can be difficult to gage, and even harder to break loose. There’s a reason emcees and guest spots talk about “warming up” the crowd for the headlining acts. But fortunately for us, laughter is infectious, and once it gets going, it has a momentum of its own. Which is why a couple of strategically placed plants can grease the wheels and get everything moving in time. People pay to go to a comedy club to laugh, and we do our best to provide the supply for that demand. In the context of a Saturday night with a couple hundred people looking to be entertained, it’s a harmless little trick to get everyone rolling before the two-drink minimum starts doing its work.

In the context of a President standing before a group of national security professionals with the anonymous stars of their fallen colleagues and friends at his back, however, it’s a horrendously offensive abuse of power and public trust. It’s a naked attempt at emotional manipulation of the people present, and propaganda aimed at the people watching from home.

Almost everything about Trump’s public persona is performative. From his canned laugh squad, to his reliance on catch-phrases, to his over-the-top premises, to how he tries to deal with his many hecklers, any working comedian recognizes the beats. Except Trump only punches down, attacking the disabled, the sick, the disenfranchised, the oppressed. Our tired, our poor, our huddled masses yearning to breathe free.

Donald Trump is a parody of the sort of cruel, misogynistic, often homophobic, exploitative comedy that dominated before modern sages like George Carlin and Bill Hicks came along to show comedians our purpose, and our power. We are the court jesters, the philosophers, the men and women tasked with speaking truth to power and twisting the screws.

Trump wants people to think he’s funny. But comedians across the country know genuine laughs when we hear them, and we’re busy sharpening our wit to lance this boil once and for all.