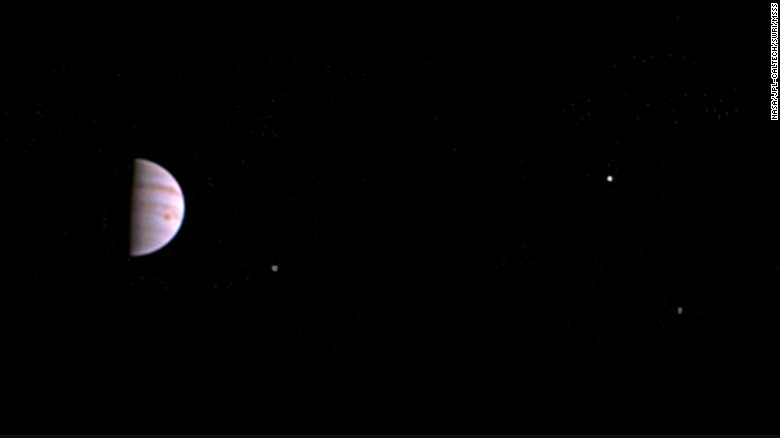 I say the best patch to search for ET around our star for several reasons. First of all, Europa has an ENORMOUS subsurface ocean, totaling as much as twice the volume of Earth’s oceans of liquid water and, even more encouragingly, resembling them in chemical composition as well. And unlike Mars, the potential biosphere beneath Europa’s ice has been actively stewing for billions of years.

Also unlike Mars, the odds of cross contamination from another body into Europa’s oceans are slim. Any ancient bacteria hitching a ride on a meteorite knocked loose from Mars or Earth would have to contend with not only the intense radiation belts surrounding Jupiter (Jupiter actually puts out MORE energy in radiation than it receives as light from the Sun), but it would have to have penetrated many kilometers of rock-hard, solid ice.

Which, for my money, makes Europa the best candidate for a true, second genesis of life in our solar system that arose independently of any life forms found on Earth. Thanks to pioneering work done by NASA’s Spirit, Opportunity, and Curiosity rovers, we know with a high degree of certainty that long ago, Mars had a warm, wet environment with a thick atmosphere many tens or hundreds on millions of years ahead of the point Earth reached habitability.

I would not be surprised at all to learn the life started there and then an asteroid impact made Earth and Mars into kissing cousins, swapping spit and mouth bacteria back and forth for millions of years. which means there’s a good chance that no mater which one life actually started on was the single point of origin. Which would be an amazing discovery, but would tell us nothing concrete about the prevalence of life in the rest of the universe.

Europa probably watched on in envy as the action between Earth and Mars heated up, but couldn’t join in. Which means (probably) that if there IS life in the dark waters under Europa’s ice, it was entirely home brewed. And THAT would mean life developed independently, twice, in the same solar system, within a few billion years, likely far fewer. And THAT would mean that the universe is absolutely lousy with life. As saturated with it as a teenaged boy’s crumpled sock.

Amazingly, initial funding for a Europa mission has gotten through Congress. And since it’s well after 2010 and we haven’t gotten any  cryptic “All these worlds are yours except Europa. Attempt no landings there,” messages, I for one can hardly fucking wait for it to launch. And for the love of God, can we stop letting the robots do all the cool exploration jobs? Let’s get alien dirt under our fingernails, people.

Oh, and if you want a masterful fictional exploration into the sorts of things that might be swimming around in Europa’s oceans, go buy A DARKLING SEA by James L. Cambias. It has not one, but two of the most expertly crafted alien societies I have ever read.