Ten Tips From Sheet To Shelf 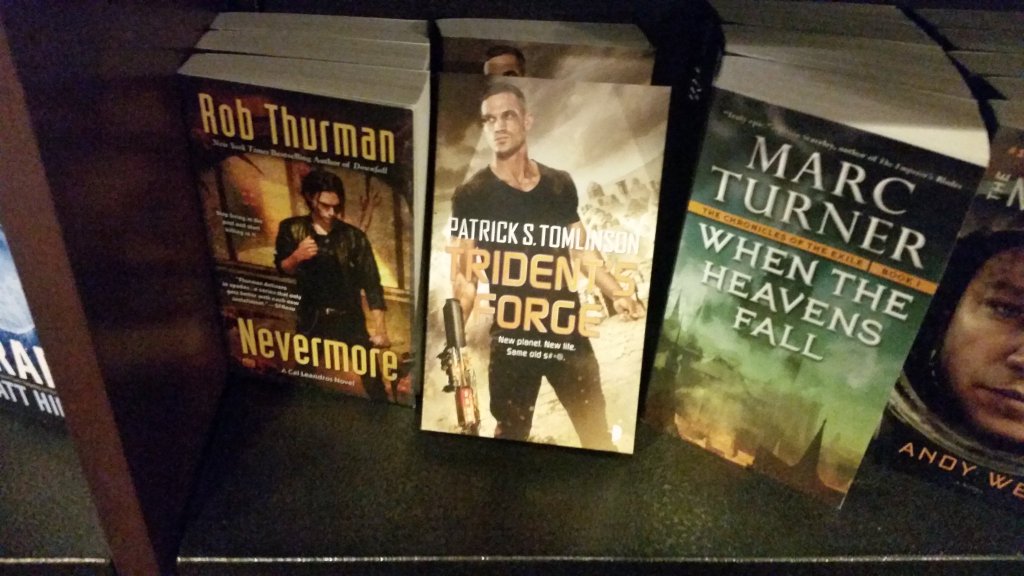 Last weekend, I spent four glorious days in Seattle at the 14th Emerald City ComicCon selling and signing my new release, surrounded by other authors, throngs of readers, and more than a few aspiring writers. It’s pretty easy to spot the serious ones. Those people right on the cusp of making a real go of it.

Now, normally I do my best to sabotage these people with terrible advice to thin the herd and reduce future competition. But my marketing guy tells me people like it when you’re helpful or whatever, so here goes. What follows is a list of ten things you can do (or not do) to greatly increase your chances of seeing your novel on the shelves of your favorite bookstore.

The key word here is realistic. Every writer has their own pace, and it can vary immensely from day to day. Some of us are capable of cranking out five thousand words per day and a novel every other month. Others struggle to write a thousand. Track your progress and find your average over a span of a couple of relatively uninterrupted weeks, then set your target appropriately and aggressively pursue it. Personally, when I’m writing on a deadline, I aim for between 1,500 and 2,000 words per writing day.

2. Don’t: Beat yourself up for days you fall short.

We all have days when we have to stay late at the day job, days when family obligations take priority, or days when we’re just not feeling it. The people who say “To be a writer, write everyday,” are full of shit. Outside of breathing, no one does anything every single day. Life has a way of intruding on our ambitions. It happens to everybody, and mentally putting yourself through the ringer when the inevitable happens only hurts your motivation tomorrow.  Just dust yourself off and come back to the keyboard in the morning, fresh and enthusiastic to continue.

3. Do: Finish your manuscript before editing or rewriting it.

Trust me on this. Before you can effectively rewrite the beginning of a manuscript, you have to have an end of said manuscript. Otherwise, how are you going to know what needs to be change at the start of the book to strengthen its conclusion? I remember a young lady in an old writer’s group I used to frequent who for two months rewrote the first chapter of her book a total of six times, each time bringing it back for another round of critiques, when instead she could have had the first six chapters done. Don’t do this. “The End” should be when your rewriting begins, not before.

4. Don’t: Start submitting to agents or publishers until you have a completed manuscript.

The opposite of being too eager to start rewriting is being too eager to start submitting. There was a time long ago when an aspiring writer could pitch and sell a book to an agent or publisher based on nothing more than a synopsis. With very few exceptions, those days are over. Agents need to know that you are able to do the most important thing an author needs to do; complete a novel. Publishers simply aren’t going to take the risk on an unknown writer being able to produce a quality manuscript within their deadlines, because that’s a skill so few people possess in the first place. Once you’re established and have proven yourself, then you’ll build up enough trust in your professionalism to justify that risk. But unless you’re a celebrity, or a politician, or an athlete, it’s just not happening these days.

5. Do: At least one thorough rewrite.

You reached “The End.” Excellent. Now, walk away for several weeks, or even a month. Go fishing. See some movies. Run a marathon. Whatever, just don’t look at your manuscript for a while until you can approach it again with fresh eyes. Because your rough draft of your first novel will need close examination. It’s going to have problems with pacing, characterization, plot, all of it. It’s probably too long. It’s probably got at least one character who doesn’t need to be in there. It’s probably got loose ends that need tying or plotlines that need pruning entirely. Nobody sticks the landing the first time. Few stick it the tenth time. It’s not ready, trust me.

6. Don’t: Rewrite it a hundred times and never finish.

Here’s a little secret. Nobody ever finishes a novel, they just run out of time to keep tinkering with it. There are a dozen things about the two books I have on shelves right now that I’d love to change. Some of the things I wasn’t satisfied with in the first book I tried to address in the second. Some of the things I didn’t like in the second book, I’m tackling in the third. The important part is they’re on the shelves, and not trapped in the purgatory of my computer. I did four major rewrites on THE ARK before it was printed, and three on TRIDENT’S FORGE. After the first go through, the rest were under the direction of my agent and or editor. Don’t second-guess yourself. There will be plenty of other people to do that for you.

7. Do: Find a few beta readers to read your manuscript.

Let’s start off by defining the term. Beta readers are nothing more than people who are willing to read through your entire manuscript and give you honest, constructive feedback. They can be anyone from your family and friends, to other writers at any level who you have a good relationship with. Often, writers will agree to do a beta swap where each reads for the other. Betas, whoever they are, need to understand from the get-go that they aren’t there to stoke your ego with platitudes. Their job is to give your manuscript a stress test, find and identify its weak points, and to flag them for review and revision. Your job is to listen to what they have to say and consider it objectively without getting defensive.

9. Do: Get started on the next project.

Once your manuscript is cleaned, pressed, and has started being passed around, its time for you to move on. It’s out of your hands now, and it’ll often take many months before you start getting responses. The best thing you can do in the meantime is start your next book. Experience is the best teacher, and nothing makes you better at writing books faster than, well, writing books.

Seriously, don’t do this. I know you’ve got outlines for all fifteen books of your ‘Lord of the Rings’ slaying fantasy epic just burning a hole in your soul, but do not start writing the second book in the series now. Nobody buys Book II by itself. Instead, pick something very different, even a different genre, and challenge yourself. Push boundaries in your characters and story. Go dark if your last book was lighthearted, or light if your last was brooding. Switch to sci-fi if you just finished a fantasy. Throw in a time-traveling mermaid. Whatever. By so doing, you’ll expand not only your chops as a writer, but you’ll double the number of books you can submit, and the number of agents and editors who might be good fits for your work.

But most importantly, don’t take any of this too seriously. Take time to daydream. Stare out a window. Play a game. For its here that you plant the seeds your imagination will grow into the ideas you’ll harvest later. Good luck, and for God’s sake, buy my books.