On the Confederate Flag, Symbols, and Who Decides 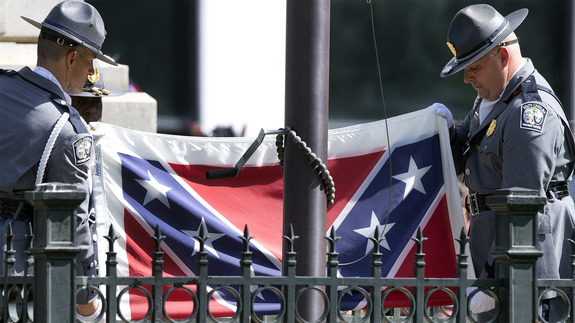 The Confederate flag comes down in South Carolina 7/10/15

I had some quick thoughts about the Confederate flag controversy. I’ve heard a lot of otherwise reasonable and intelligent people claim that the flag means something other than slavery and racism to them. Southern heritage and pride comes up a lot, and no one is saying it’s not okay to be proud of where you come from. I lived in the South for six years, and there is beauty to be had almost everywhere you go.

Here’s the deal. You need to learn to seperate Southern heritage and pride, which are entirely understandable and justifiable things, from a symbol of racism and hatred. Because I’m sorry folks, but that’s what the Southern Cross is. It was flown by traitors to the country who seceded so they could preserve their slave-based economy. It was once more revived in the 1950’s as a symbol of segregation and Jim Crow laws.

What white southerners think the flag means to them is immaterial. They are not the people who get to decide what the flag represents.

Think of it like this. We don’t ask the Jews to accept whatever meaning the decedents of Nazi soldiers choose to believe the swastika means, because they were the victims of the evil perpetrated under that symbol.

In the same respect, it’s not the decedents of white slave owners we should be asking about the meaning of the Confederate flag. It’s the decedents of the slaves. And not just decedents, we’re also talking about people who are still with us who lived through the beatings, arrests, hoses, dogs, stones, and even lynchings committed under that symbol during the Civil Rights movement.

If you care about fairness, equality, and compassion, those are the people whose opinion should carry the most weight with you.

But it’s not okay anymore to continue supporting the symbol and embodiment of those sins, while insisting that everyone affected by them accept the justifications and meaning you have created for yourself while ignoring their lived experiences.

That time is long past.