Waging War on the Minimum Wage

With the President’s recent commitment to try and raise it and news coming in from SeaTac, Washington, the public debate over the minimum wage is heating up again. I’ve hashed out my conservative argument for raising the minimum wage before, but I’ve been seeing a lot of fallacious arguments and memes making the rounds on social media that I’d like to address. Here’s one common example: 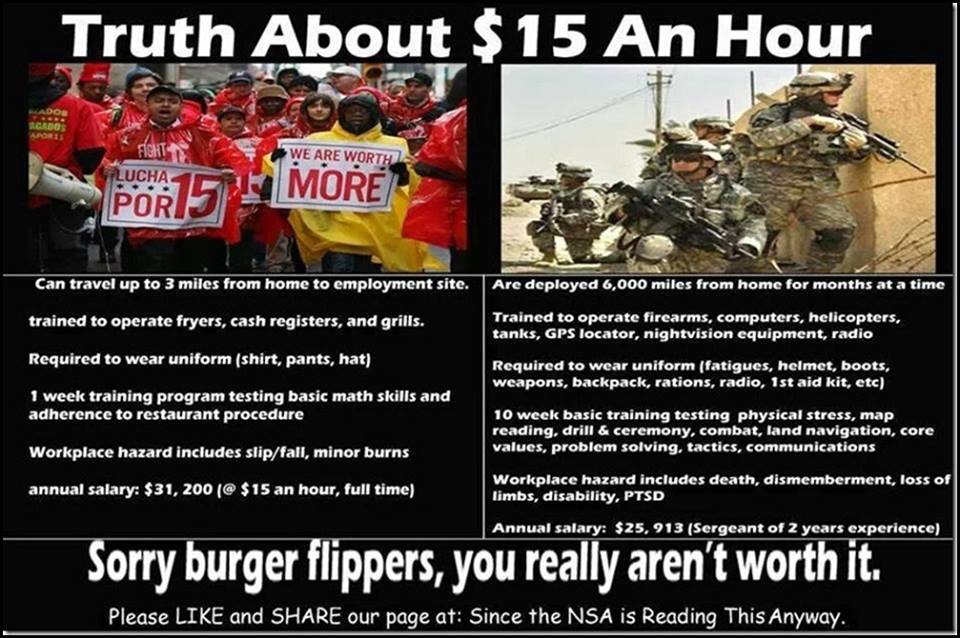 This “argument” rather spectacularly misses the point. The minimum wage was intended to provide a minimum living standard for people working full time. It doesn’t come close  to accomplishing that today anywhere in the country. It hasn’t kept up with inflation or the growing costs of living.

However, that is true across the board. With the exception of the very highest levels, income has stagnated for the vast majority of the country over the last thirty years. Indeed, adjusted for inflation, it has scarcely increased since I was born more than three decades ago in 1980. This despite the fact worker productivity has been increasing steadily over the same timeframe.We are more productive, and therefore more profitable for our employers than ever before. Corporations have been reaping record-shattering profits for several years now. Yet lower and middle-class workers haven’t shared in any of the gains that their work has produced.  Indeed, of all of the real income growth our country has experienced during the last few years of economic recovery, 90% of the growth in income has gone to those Americans already in the top 1%. Call me crazy, but I find it unlikely that the top 1% managed to do 90% of the total additional work over the last six years.

Never before has the value your work brings to a company bore so little relationship to the income you took home for those efforts. This is, to put it mildly, unsustainable. We are ALL long overdue for a big raise.

Raising the minimum wage to a realistic level is the first step in making that adjustment. Doing so will put upward pressure on hourly rates and salaries all the way up the ladder and eventual help to redress the massive imbalance between company profits and CEO compensation packages, and the reality of stagnant or even falling incomes for the people laboring beneath them.So if you want soldiers, or firemen, or police, or teachers to get paid more, which they absolutely should, then it’s time to start supporting a real minimum wage and watch the dominoes fall from there.