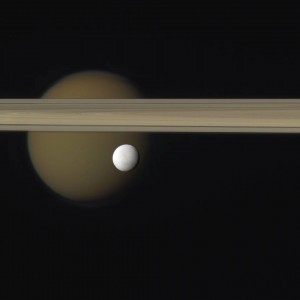 This is just about the coolest space picture I’ve ever seen. Let me tell you why. What we’ve got here is a picture taken from inside the Saturn system by our intrepid space probe, Cassini. NASA launched this plucky little bugger back in 1997 when  every twelve-year-old girl in the country was losing their shit over Titanic.

Seven years later, Cassini reached Saturn and set up shop, where she’s been doing the fuck out of some science for the last ten years, like a boss. The band in the foreground is Saturn’s famous rings known since the time of Galileo as seen from edge-on, looking out on the rest of the solar system.

The small white cue-ball just below the band of rings is the tiny moon of Enceladus. Despite being discovered in the eighteenth century, very little was known about this diminutive satellite until Cassini showed up and discovered liquid water geysers which not only continually replenish Saturn’s E ring, but reveal the presence of an underground heat source, organic compounds, and the probability of a sub-surface ocean in the moon’s southern polar region, instantly jumping it to the top three places in the solar system to look for life behind Mars and Jupiter’s moon Europa.

The brown, fuzzy pancake behind Enceladus is Saturn’s largest moon, Titan. Titan is unique for a number of reasons, including being the only moon in the solar system with a significant atmosphere. It’s actually quite a bit thicker than the atmosphere here on Earth. It is also the only other known body outside of Earth with liquid at its surface. It has lakes, rivers, clouds, and even rain. Granted, the liquid is made of hydrocarbons many hundreds of degrees below zero instead of water, but still. The only reason we know any of this is, yet again, because Cassini told us, or more accurately the European Space Agency’s Huygens probe that hitched a ride. Huygens parachuted down to Titan’s surface back in 2005, and while it only lasted a few hours before succumbing, it sent back a wealth of data and amazing pictures which have wet the appetites of exobiologists around the world at the possibility of exotic bio-chemistry lurking on the surface.

What really blows me away about this photo, as opposed to the wealth of images from say the Hubble Space Telescope, is that it was taken on scene. This is a vacation shot taken by something we built and shot out over hundreds of million of miles that has been in space for seventeen years already. And it manages to capture not on the rings, but two of the top four places to search for new forms of life in the solar system. It’s an amazing demonstration of how far we’ve come as a species, and how much more there is for us to do.

So stop bitching about how much money we spend on space exploration and fund these nerds already.