Robin Williams and Depression as a Muse 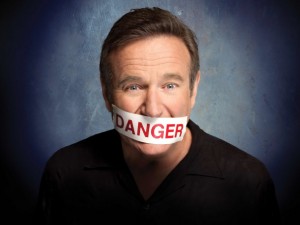 This post is about comedy, but there won’t be anything funny about it. In truth, I’ve been looking for a way to share much of what I’m about to say for a long time now without knowing how. But today seems as appropriate as any.

For those of you who don’t know, Robin Williams, the infinitely strange and immensely talented comedian and actor was found dead today at age 63. While we don’t have all of the details yet, the consensus is he committed suicide, a conclusion supported by reports from his surviving family that he had been fighting a severe bout of depression recently.

And fighting is the right word. The only word that fits. It’s easy for someone watching from the outside to mistake depression for a bad day, or a sour attitude, something that passes like bad weather. Nothing could be further from the reality millions of people face. Depression isn’t an outlook, or a worldview, or even an emotion.

Depression is a monster. But unlike the monsters that torment children, hiding in closets and under beds, this monster is real. You can’t escape it, because it lives inside your soul, waiting. You can’t hide from it. It stalks you, relentlessly, every waking moment of your life, probing the armor you wear against it, searching out chinks and gaps it can exploit. It whispers to you, lies to you, undermines you.

At every moment, this monster is trying to kill you.

I know this monster. Not as well as some, but well enough. I have been its prey. Looking back on my life, I’ve probably tangled with it a half dozen times or so, dating back to grade school growing up as a scrawny, nerdy atheist kid in a small town. Right after high school, it almost got my little brother, but failed.

Life was pretty good after college. I’d moved down to Florida with my best friend, and my girlfriend followed soon after. We married four years later. For nine years, we were a model couple. We seldom fought, started building careers, dug ourselves out of debt, and settled in to start a family. We were the pair that our friends looked up to and wanted to emulate. I’d never felt so happy, loved, and secure in my life.

Then, two weeks after we became pregnant with our first child, she told me we were divorcing. She refused to participate in any counseling, and demanded that I sign the divorce papers or she would have me served. No warning, no signs of trouble, no money problems, no infidelity, nothing.

I pleaded with her, begged for the life we’d built together, and for the life growing in her belly. But if she heard any of it, she didn’t care. She told me that she had never loved me, had never been attracted to me, didn’t respect me, and didn’t trust me.  It was a lie, of course. A lie she told to me, but more importantly to herself. A lie she continues to tell herself to this day.

But at the time, I couldn’t recognize it. I was, simply put, destroyed. It was like being unmade, almost murdered. I cried uncontrollably everyday for weeks. I didn’t have a full night’s sleep for seventy days before I lost count. I ate so little that I lost twenty pounds, and if it wasn’t for the rivers of beer I drank to numb the world, I would have lost even more.

This is when my monster came back from its exile and pounced. Somehow, I managed to continue on auto-pilot, paying my bills and working, but at every moment the monster sapped my energy. It left me mentally and physically exhausted, yet unable to sleep and recover. Alcohol and sleep medication was all that kept it at bay for a few hours at a time and let me rest.

My monster consumed my sense of self-esteem and worth, leaving me with nothing to fight back against it. I entered counseling for a time, searching out new weapons, but growing up with a psychologist for a mother, I knew the score and saw through the manipulations designed to help me find my way out again. My monster turned my intelligence and stubbornness against me, convincing me that it was right using my own greatest strengths and defining characteristics to do it, convincing me that it was actually my voice I was hearing, instead of its lies.

At about this time, my beautiful daughter was born, and the monster took her from me. It, along with some less-than-helpful words from my now ex-wife, convinced me that I was so worthless, so broken, that I would be nothing but an anchor on my daughter’s life. That she would be better off if I wasn’t around to screw her up like her pathetic, unlovable father. I signed away my parental rights, not because I wanted to give her up, but because wallowing around in the pit, I believed with all my heart that I was doing what was best for her future. It’s a mistake I’ll never be able to take back, and the only thing I actually regret from that time in my life.

Then, the monster managed to put a gun in my mouth. I was half an inch from surrendering to it and becoming yet another statistic. I don’t know why I didn’t. I’d like to say something inspiring like I saw a picture of my daughter and I didn’t want her to grow up without her real daddy. Or I had a moment of clarity and insight that pulled me back. But those aren’t true. Honestly, I may have just been too tired and unambitious to pull the trigger.

So it’s with some authority and personal experience that I say this next bit: If you’re one of those people who says suicide victims are weak, or cowards, or selfish, do me a favor. Grab the nearest pen, and stab yourself right in the eye, because you don’t have the first mother-fucking clue what you’re talking about.

Suicide victims are exactly that, victims. By the time the monster has eaten away that much of you, you aren’t capable of seeing yourself, the world, or your place in it rationally. I believed right before that moment that I was a cancer that needed to be cut out of humanity, that I was a disease infecting my friends and family, and that the right, proper, and noble thing to do was to excise myself and save them from the symptoms.

That’s what depression does to people. Male, female, beautiful, homely, young, old, famous, obscure, wealthy, poor, none of it matters. The monster will hunt them all. Some of them will fall victim to it and people will stand around saying stupid shit like, “They had so much to live for,” or, “They were rich, what did they have to be sad about?” Seriously, fuck you.

Which brings me to comedy. It’s a poorly kept secret, but comedians aren’t actually funny people. Often times, they are some of the most emotionally scarred people you can imagine. I’ve been doing comedy in the MKE and Madison scene for two years now, and I don’t know a single comic who wasn’t damaged in some way, often severely.

It’s what we do with that pain and emotional disfigurement that sets us apart. I was fall-down drunk the first time I did comedy. I was drunk because I was hurting deep inside myself, way down past where smiles and kind words could reach it. I was able to get up on stage in front of complete and utter strangers and slur my way through some lame jokes I hadn’t prepared not because I was brave, but because I had already lost so much  that there wasn’t anything left to be afraid of.

What did I care if these folks didn’t like me or thought I was an idiot? How would that be any different than the way I thought everyone else already felt about me? I told jokes that night more out of anger than anything. I vaguely remember asking the audience if they’d ever been so hung-over they put hair conditioner on their toothbrush. That’s about it.

But, to my amazement, some people laughed. Genuinely laughed. For the first time in almost a year, I felt the world open up a little bit. So the next week, I did it again. And again. Soon, it was a habit, then an obsession. I was watching all the pain and anguish that had tormented me turn from poison into something positive. I was making people laugh, giving them a break from their own struggles to share in the absurdity of our mutual existence and give it the middle finger for an hour or two. Comedy, family, close friends, and the love, understanding, and unconditional support of my girlfriend finally gave me the weapons I needed to subdue the monster. It sleeps once more.

The best comics are born from tragedy. It gives them the perspective, motivation, bravery, and material to rise above the fray. How many comics can you name that are still on their first marriage? How many haven’t had a private, or often very public battle with substance abuse? Hell, Richard Pryor very famously lit himself on fucking fire, nearly becoming Richard Pyre in the process.

Robin Williams was no exception. His comedic brilliance was fueled by his manic depression, battles with drug addiction, and personal tragedies, many of them self-inflicted. These were battles he fought his entire life.  Without his personal struggles, the world would have been deprived of his wit, his zaniness, and his heart. We would never have met Mork, or seen Peter Pan all grown up fight against Captain Hook for the love of his children, or watched Mrs. Doubtfire square off against James Bond over Sally Field, (not that I’d fight over Sally Field, but whatever). And me and Tim Korklewski wouldn’t have been literally rolling around in the isles in the Desert Star Theatre in the Dells while we watched Rainbow Randolph shouting at Edward Norton in a rhinoceros costume, “That’s not a rocket. It’s a COCK! Twig and berries! Rumple Foreskin!”

There are people who have had immense impact and influence over my life who died before I had the opportunity to meet them, shake their hand, and thank them for all they meant to me. People like Jim Henson, Gene Roddenberry, Douglas Adams, and Christopher Hitchens. I had to add another one today, and it breaks my heart.

If you know someone who is fighting the monster, do everything you can, everything, to help them defeat it. Never give up on them. If they’re still alive, it’s because they haven’t yet given up on themselves. They need tools, they need weapons, they need allies, even if they can’t put their needs into words or find the strength to ask. Give them what they need.

I’m going to leave you all with a playlist of my favorite of Mr. Williams’s performances. Robin Williams: Live on Broadway. Enjoy it, and thank the memory of this man for all the joy he was able to give the world.