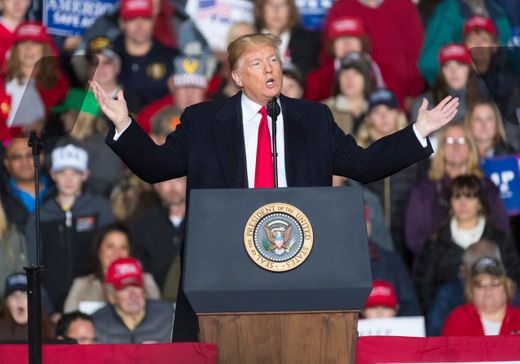 In the last week, we’ve seen an almost comically unbelievable series of events, the sum total of which confirms once and for all that, yes, Donald J. Trump really is a fascist supervillain.

Let’s start with Monday. At a campaign rally in Houston for Tex Cruz’s fading Senate bid, Trump proudly and publicly outed himself as a Nationalist, which, everyone had already figured out long ago, but it’s still not something you come out and say. Even Trump himself acknowledged the toxicity when he said “We’re not supposed to use that word.” Yeah, no shit, Sippy Cup Caligula. Because it’s closely tied to leaders and political movements responsible for the most egregious atrocities of the 20th century. It was the nationalism of the Nazis, Mussolini, the Imperial Japanese, Stalinists, and Mao that killed upwards of a hundred million people. The word kinda has a funk around it for a reason.

But naturally, the capacity crowd of his fawning sycophants ate it up, then took it one step further, returning to the 2016 campaign trail chant of “Lock Her Up!” demanding the extrajudicial arrest and imprisonment of Secretary Clinton, a woman who has been investigated countless times by both her congressional colleagues and the FBI without a single charge ever being brought against her. For his part, Trump egged them on, just the latest example in his long history of normalizing violence against his political opponents.

The very next day, his hard work paid off. A package arrived at the home of Democratic mega-donor and frequent target of Trump’s attacks, George Soros. Inside the plain manila envelope was a crudely-made, yet potentially lethal homemade IED. It proved to be only the first of many. Over the next three days, bombs sent C/O Representative Debbie Wasserman Schultz either showed up at, or were intercepted en route to the homes and offices of a dozen prominent Democrats, media institutions, and Trump critics, including the Clintons and Obamas, Vice President Biden, former Attorney General Eric Holder, former head of the CIA John Brennan, Representative Maxine Waters, NY Gov Anthony Cuomo, Senators Cory Booker and Kamala Harris, former National Intelligence Director James Clapper, actor Robert Di Nero, and CNN’s studio in NYC.

Every single one of these people or organizations have, at one time or many, been singled out by Trump either on Twitter or in public addresses for attack. Trump’s rhetoric has been pushing people towards violent action from the moment he launched his fraudulent bid for the White House, threatening to punch people, rough them up, and even pay the legal fees of anyone who beat up protestors. And increasingly, his supporters have been taking him at his word. The Charlottesville rally that columnated in the death of Heather Heyer was only the first incident to capture national attention. The brownshirt gang known as the Proud Boys has been caught physically assaulting counter-protestors in recent weeks as their leader Gavin McGuiness calls for more violence. An affiliated group went so far as to place armed snipers on rooftops during protests in Portland.

The attempted serial bombings of basically the entire Democratic leadership, therefore, cannot be viewed in isolation. It is a continuation and escalation of a trend that has been ongoing for over a year now. It also just happens to represent the largest political mass assassination attempt in our nation’s history, no matter how ineptly implemented.

In the midst of the crisis, as bombs were still being discovered and targets identified, while the identity of the bomber remained unknown, Trump took to Twitter to deliver a bomb of his own. 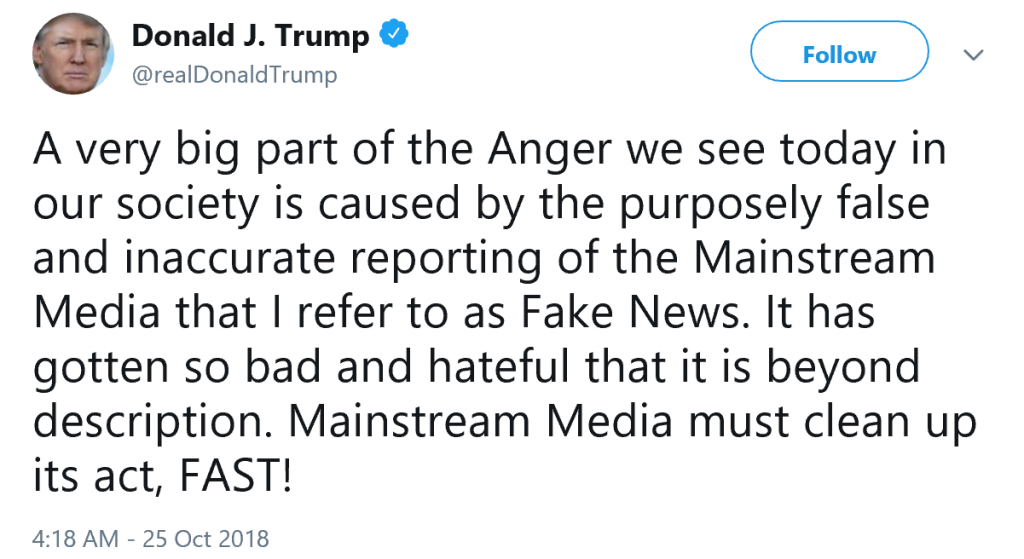 Let’s not beat around the bush here. This tweet isn’t just Trump’s usual gaslighting and victim-blaming. That’s almost passé at this point. This tweet is something far more sinister. First, it again repeats Trump’s Fake News canard, which is just a dumbed-down version of Hitler’s frequently uttered “lugenpresse” (lying press) slur, a connection not lost on his far right and neo-Nazi followers, who brought lugenpresse back into the popular lexicon during the 2016 campaign.

Secondly, and more importantly, this can only be read as a threat. It is Trump saying, explicitly and unequivocally, that if the press doesn’t stop publishing negative (ie true) stories about him, his followers will continue their attempts to kill them. It is an attempt to use a national crisis to silence his critics through intimidation.

Today, the suspected bomber was arrested, and surprising absolutely no one with more than six braincells to rub together, it turns out he’s an enormous Trump supporter. His van is festooned with so many pro-Trump and anti-Dem stickers that it looks like a racist ice cream truck.

Many people in the media and government have taken to calling these attempted bombings domestic terrorism, but that’s not quite right. Terrorism is a form of asymmetrical warfare the weak use against a superior force. That’s not what we’re seeing here. When supporters of the political party in power use violence to silence or intimidate the minority, that’s not terrorism. It’s fascism.

A point Trump was only too happy to confirm today when speaking to a group of young Republicans in the White House.  Days after declaring himself a Nationalist, Trump came out swinging against ‘Globalists,’ which as anyone who’s been following along with the alt-right for the last few years knows is simply a stand-in for Jewish. Trump knows this, and so did his audience, which immediately started chanting “Soros!” the Jewish philanthropist and Dem donor who had been targeted for death by one of Trump’s own supporters only three days prior. We’re long past dog-whistles, here. No one on team Trump is even trying to hide their fascist tendencies anymore.

Update, 10/27/18: Gods, I hate being right all the time, but literally one day after Trump’s transparent attack on Jews, seven people were shot dead by a gunman at their synagogue in Pittsburg. Yes, Trump knows what he’s saying, and yes, so do his brownshirts. They are receiving and carrying out orders.

As always, if you appreciated this post and like what I’m doing here, subscribe to my email newsletter in the box at the top of the page.