Bernie Sanders Has Hillary Right Where He Wants Her 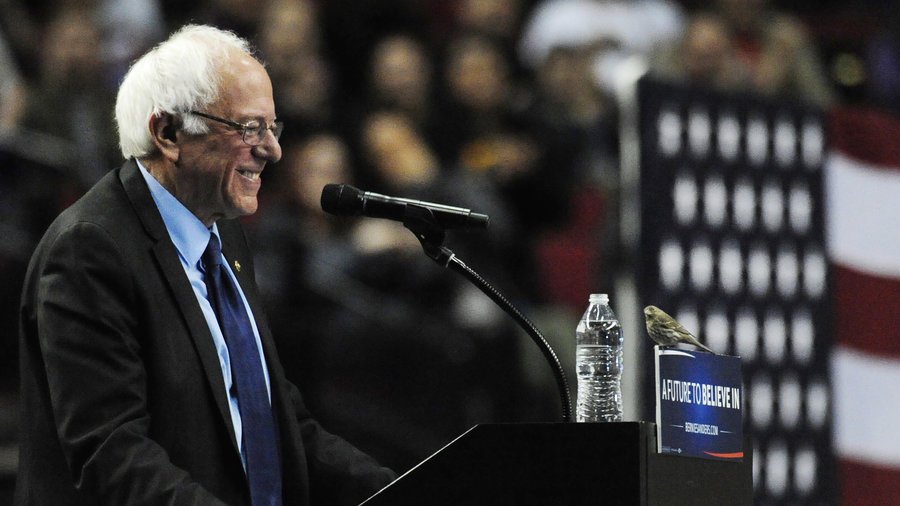 Bernie Sanders is on the verge of an unprecedented political upset that will propel his vision for America forward for the next eight years. He has the potential to completely transform the political landscape for a generation or more. Bernie has Hillary right where he wants her.

Wait, calm down. I’m not talking about the primaries. Oh hell no. His campaign for President is fuckin’ toast, you guys. Has been since March 14th, at the latest. Since 1972, no candidate who trailed in the Democratic primary after the first 10% of pledged delegates were awarded has come back to win the nomination. Proportional delegate allocation makes it far too steep a hill to climb. We’re way past the two thirds mark at this point. He’s down by three million votes and more than three hundred pledged delegates, to say nothing at all of the Supers. It’s not happening. Stop kidding yourselves.

No, the victory I’m talking about goes much deeper than a single office, and will have a much longer-lasting impact. If you’re savvy enough to make it happen.

Despite coming up short in the primary race, Bernie has accomplished something extraordinary. Something that hasn’t happened in my thirty-six years living in this country. For the first time in my life, a populist movement has coalesced around a truly left-wing, liberal candidate and his socialist policies (yes, yes, democratic socialist. I’m not using it as a slur). Candidate Obama in 07/08 primed the pump for this movement in many ways, even if President Obama, faced with the realities of politics in DC, had to back away from many of his loftier goals in order to accomplish anything in the midst of historic levels of partisan gridlock.

Eight years later, along came Bernie Sanders. Suddenly, free college education, a living wage, universal single-payer healthcare, and serious attempts to manage income inequality are on the forefront of voters’ minds across the country, and across the political spectrum. Bernie has managed to pull the political conversation, indeed the social consciousness of the country to the left for the first time in a generation or more. He has expanded what is considered “acceptable” political discourse into territory that the American population has not explored in any serious way since the beginning of the Cold War.

Some of that is simply a result of the passage of time. Millennials are the first generation to grow up never knowing a world without the U.S.A.  sitting squarely at the top of the economic, military, and cultural pyramid as a lone and unopposed superpower. They didn’t grow up seeped in anti-communism propaganda and all of the negative associations that go along with it. The old “Red Scare” rhetoric about the existential threats posed by communism sounds like an old-timey news reel to the Reddit and Snapchat crowds.

Further, Millennials are the first American generation  who are projected to do worse on average than their parents, both professionally and economically. Despite being the most highly-educated generation in history, they face massive college debt, slim job prospects, soaring home prices, zero job security, and the chance that the very concept of  retirement will become effectively extinct before they ever reach it.

Given these social conditions, it was probably inevitable that a candidate like Sanders and the socialism he expounds would eventually get a second look from young Americans. Especially considering the rapid globalization of both education and employment introducing a new generation to the democratic socialism of many highly successful European countries.

First of all, a really quick civics lesson, because a lot of people seem to have forgotten. Presidents do not write laws. They only sign and enforce them. Granted, it is tradition for the President to set policy agendas for their party, but the nitty-gritty of authoring bills, finding co-sponsors, guiding them through committee, bringing them to the floor, and securing enough votes for passage, all of that happens within the twin houses of our legislative branch. Only at the very end of the race does the President show up to sign or veto a bill.

Which is why I say Bernie Sanders is exactly where he needs to be. When the fog of the primaries clears, Sanders will return to his place as Vermont’s Junior Senator with two years left on his current term, and easily on pace to secure another. He will walk back into the capitol building in January, 2017 with an enormously elevated profile. He will have very little trouble finding partners among a new crop of Democratic Senators eager to add their names to any bills he wants to introduce, and equally enthusiastic freshmen representatives in the House looking to hitch up to his wagon.

From his new position of leadership within a party he only recently became a member of, Sanders will have the opportunity to steer the direction of the Democrats in the trenches, crafting bills and using the considerable public attention and pressure his grassroots supporters can bring to bear to get them through the Senate.

Sanders’ natural talents swing closer to campaigning and building momentum among like-minded people than they do in actual administration or the kinds of ugly compromises that are a necessary part of governance in a democracy. Which is why he is most valuable going forward in his existing position in the Senate, where popular momentum and public pressure are the lifeblood of passing bills. Sanders can deliver both.

Let the President try to make nice with the howling loons on the other side. Let them get their hands dirty with the ugly realities of political expediency. Sanders will be most useful as the untarnished, uncompromising icon of a new progressive movement.

However, for any of this to work, Sanders needs a crop of fresh faces in the Senate and House to partner with. This means his supporters need to shift their focus to the down-ticket races. So far, this has been a real problem. In Wisconsin, for example, Sanders carried the primary by fifteen points, much to exuberant celebration by his supporters throughout the state. However, a significant percentage of those same supporters either didn’t bother to vote in the Supreme Court race on the same ballot, or actually voted against JoAnne Kloppenburg, Sanders’ preferred candidate, contributing to her loss to Bradley and ensuring the state court would remain extremely right wing for the next ten years. A hyper-focus on the White House race ended up having real, damaging, and lasting effects in Wisconsin.

This has to change, and fast.

Political power is about so much more than a single office, a lesson we should have learned over the last eight years watching Obama spar with the most mindlessly obstructionist congresses in history. We delivered him to the White House, but failed to deliver him the allies he needed in the House and Senate to implement his policies, especially in the midterms. Even before the 2010 elections, Obama’s veto-proof majority in the senate was stripped away by Republican Scott Brown’s victory in the special election to replace the seat vacated by the late Ted Kennedy. By 2010, they had retaken the House. In 2014, they took the Senate. This trend cannot be allowed to continue.

Helping Sanders win means continuing to support him after his campaign for the Presidency ends, whether that’s next week, or next month. It means staying engaged, staying informed, and turning out for the election in droves. And yes, it means voting for Hillary Clinton. I don’t care if you don’t like it. The fact of the matter is the only way ANYTHING Sanders wants to accomplish actually gets passed is if the person sitting in the Oval Office has a (D) behind their name when it comes time to sign the bills into law.

And for the love of God, do not fall to the delusion I’ve been hearing from so many Sanders supporters recently, that Donald Trump could win the White House, but be neutralized by giving the Senate and House back to the Dems. THAT. WILL. NOT. HAPPEN.

An electorate that turns out to elect Trump is not an electorate that will hand the Senate to the Dems. In the modern era, when the White House changes hands between the parties, the winner gains seats in the Senate and House. There are no exceptions. But don’t take my word for it, here’s all of the data. Do you see a pattern here? 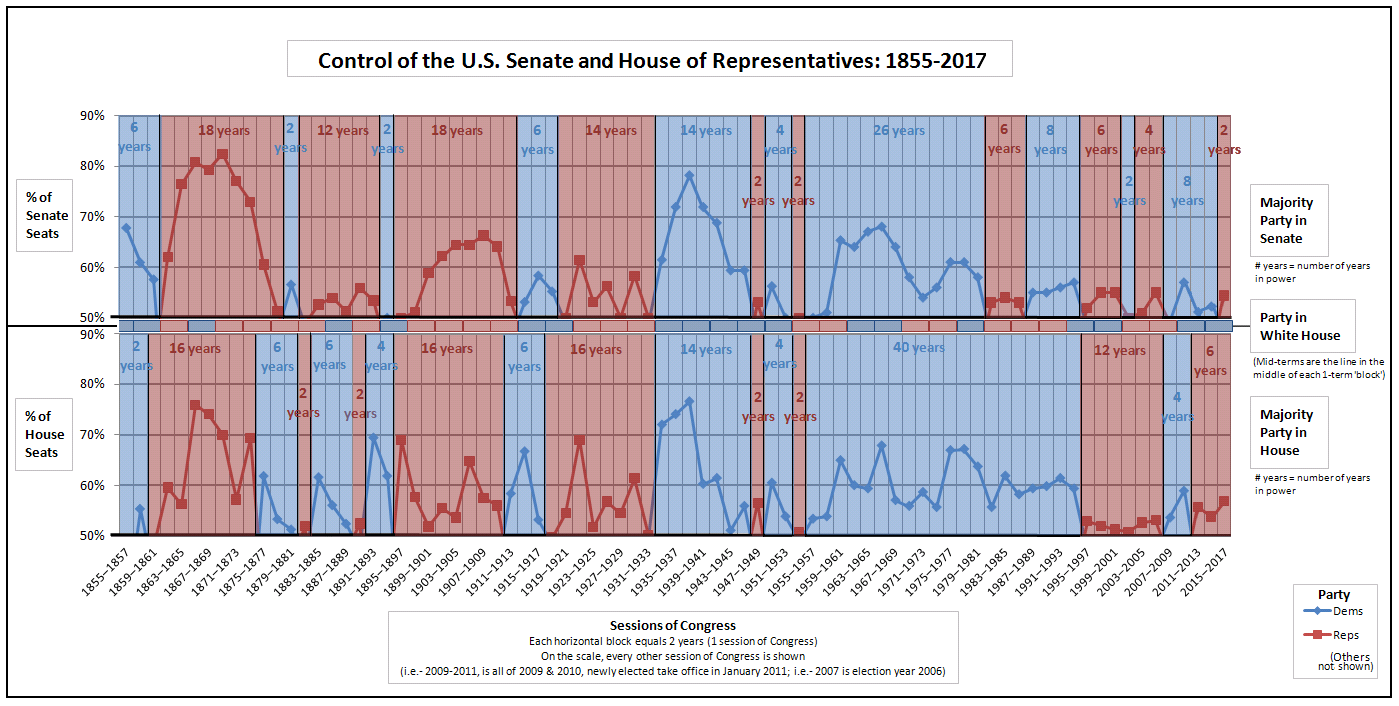 Trump winning the general election means the GOP extends its majority in the other two houses as well, not to mention stacking the Supreme Court with anywhere between one and as many as four new Justices, ensuring a rightwing, regressive court for the next twenty years.

Which is why the time for protest votes is in the primaries. If you’re in Indiana tomorrow, or any of the other remaining states and territories, by all means, vote on your principles. Even if Bernie loses the nomination, which he will, strong showings in the remaining contests will only elevate his platform’s standing at the convention and force more concessions out of the party and the Clinton campaign heading into the general. But once the inevitable happens and Bernie drops out, do America a favor. Shut the hell up, and get to work turning people out for November.

You are on the verge of a great political upset, even if it doesn’t take the form you had originally expected or hoped for. The White House was never the finish line. Politics is never a sprint. Real, lasting change takes time, discipline, and dedication. It’s a marathon, and the race has only just started.