Terrorism and the Tricky Nature of Word Usage 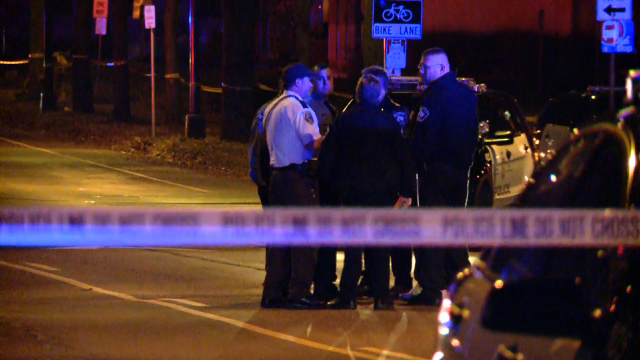 On Saturday in Irving, Texas, already infamous for not knowing what a fucking clock looks like,  gunman surrounded a mosque carrying long-rifles to “protest Syrian refugees,” in the wake of the Paris attacks, exactly none of which were actually involved in the Paris attacks.

That same day, a black rights activist at a campaign rally in Alabama was beaten by the majority white crowd while the poll-leading candidate for the GOP nomination egged his supporters on. I probably don’t have to tell you which candidate, but his name rhymes with Ronald Dump.

Then, yesterday, in Minnesota of all places, a group of unarmed Black Lives Matter demonstrators protesting the shooting death of another unarmed black man at the hands of police were themselves shot by very much armed white supremacists, wounding five. Fifteen minutes later, the police showed up and pepper-sprayed the protestors, just for good measure.

Imagine, for just a second, these situations inverted. Muslims armed with assault weapons surround a Christian church in Texas to protest U.S. support of Israel. A white man is beaten by a black crowd while Barack Obama cheers. Three black men open fire on Blue Lives Matter protestors demonstrating over the death of a police officer.

What would we call any of those scenarios? We’d call them by their proper name, of course. Terrorism.

You’d hear that word repeated ten thousand times as every newscaster on Fox News slowly dissolved into a frothy puddle of rage spittle over the course of several weeks of twenty-four hour, uninterrupted coverage.

So why haven’t we heard the word terrorism attached to any of these incidents in the mainstream media? Most people I know reflexively ascribe this odd omission to latent, persistent racism permeating American culture. And while I’m not discounting that factor as a reason, I would like to offer an alternate explanation, or at the very least an additional contributing factor.

There is a particular way we think about terrorism, and the role it plays in the world’s power structure, especially in the wake of 9/11. For many, terrorism is understood as a tool or a weapon. It’s a military strategy as much as it’s a crime.

To many Americans, and I suspect people across the western world in general, terrorism is a strategy used by the weak against the strong. It’s the tool of small, underfunded, militarily inferior forces such as al Qaeda or Daesh. They use terrorism and other modes of asymmetrical warfare because they’re cheap, difficult and costly to counter or defend against, and is the only even minimally effective way they can fight against such a vastly superior force.

Since the twin towers came down, too many people have come to define terrorism in this way, even if they’re not consciously aware of it. To them, terrorism is something that those in the weak, minority position use against those in the strong, majority position. This prevents them from seeing identical events in the same light. White, Christian people can’t be terrorists because they’re the majority here in the U.S. Terrorism is for other people.

In so doing, they miss the point entirely, and ignore important, recent historical precedent. Terrorism has been a weapon used by tyrannical governments against their own citizens since the very beginning. Rome, The Spanish Inquisition, the Bolsheviks, Nazis, Pol Pot, the USSR, Saddam, and yes, here in the U.S. from the Confederacy, to the KKK, to McCarthyism, terrorism has been employed very effectively by the strong to impose their will upon the weak.

We’re seeing it again. Adjust your filters. Recognize what’s going on for what it really is and label it appropriately.