North Korea is Run by Lunatics 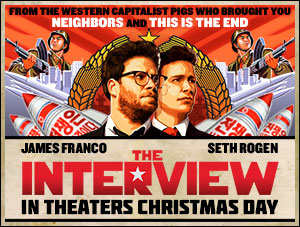 Okay, I’m going to leave the implications of Sony bowing to pressure of terrorist threats and pulling the release of “The Interview” to other pundits.

Instead, I’d like to focus on the inexplicable fact that the situation exists at all. In a truly bizarre turn of events, it looks likely that North Korea was behind the illegal hacking of Sony’s servers which dumped thousands of emails, scripts, and financial information onto the wider internet, leading to a storm of controversies involving some of our most famous actors, actresses, and media moguls.

What I can’t fathom is why?

By doing so, North Korea has played its hand and revealed a surprisingly sophisticated and modern cyber-warfare capability that the west hadn’t suspected was within their reach.

And what did the hermit republic use this immensely powerful weapon to accomplish? To influence American foreign policy? To chip away at the sanctions crippling their economy? To attack and degrade our own war fighting capabilities on the Korean peninsula?

No, they revealed their doomsday device to annihilate a Seth Rogan comedy.

I’m sorry, but that’s fucking crazy. How much of an egomaniacal, Nero-esque nut job do you have to be to waste the element of surprise on what might be one of your most effective offensive capabilities to sink a B-grade James Franco vehicle that would have been destined for obscurity if you’d have just left it alone?

That’s some Kanye-level diva shit. If you weren’t already the laughing stock of the world, Kimmy, you sure as hell are now.

And seriously, where were you fuckers when we needed protection from the “Red Dawn” remake?