Hi, I’m a Conservative, not a Republican

For the umpteenth time, I’ve had the less than pleasant experience of having to defend myself after revealing that I identify as conservative. Usually, it comes from a liberal friend or colleague who assumed I was one of the faithful. Nearly as often, it comes from a republican who accuses me of being a Rhino, Blue-Dog, or simply not a conservative at all.

Well, I am, and I think I’m part of the very small minority to which the label actually works as it was intended. Here’s an explanation of why, so I can just point people to this post in the future.

Take a look at this chart: 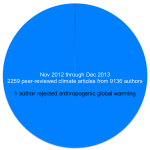 Some of you already know what it is. For those who haven’t seen it yet, it is a graphic representation of all of the scientific papers on the topic of climate change published in peer-reviewed journals over the course of the past thirteen months.

The blue part of the graph are those papers written in support of the notion that the world is warming on average, and that manmade greenhouse gas emissions are responsible for most of the increase. The black slice represents those papers that rejected this idea. Actually, that’s not right. There’s no need to pluralize “papers,” because there’s only ONE of them. One, out of more than two-thousand. I actually had to open the chart into a larger window to see it at first, because my smartphone didn’t have enough resolution to display that tiny slice.

Yet one party in our government sides entirely with that barely-visible slice, that single paper. For them, the science is undecided, and ever so controversial. “There’s no consensus!” they’ll say on the Senate floor, “And it was really cold last week!”

For the GOP, reality is whatever their donors tell them it should be. Facts, evidence, and reason are the tools of “elitists.” This pattern of outright denial of confirmed, objective reality is repeated over and over, with their stances on evolution, abstinence-only education, homosexuality, the state of healthcare, global warming, everything. You don’t have to find solutions to problems if you can just pretend for long enough that they aren’t really problems at all.

And this, dear readers, is why I identify as a conservative, but never, ever Republican. The conservative movement, at its roots, was meant to be a rejection of the well-intentioned utopian impulses that so often lead to governmental overreach. The originators of the intellectual, (yes, intellectual) tradition of conservatism like Burke and Oakeshott wanted for problems and their solutions to be well-defined and based on solid evidence, not reflexive ideology and extremism. They wanted government to operate within the confines of the real world and human nature, and to stop pretending they could fundamentally alter either by force of law.

But what is present in the current iteration of the GOP is nothing but reflexive ideology. Dogma. The unfaltering belief that government is always the problem, that taxes should always be cut, the country was founded on Christian values, and that the market is an infallible, self-correcting machine that always spits out the maximum of human success and happiness for those willing to work. It is for these ingrained, unassailable assumptions that they have ceased to be conservatives in any meaningful sense of the word.

Conservatives would see the overwhelming scientific consensus on issues such as global warming and draft up solutions that met with their core beliefs of a small, unobtrusive government and maximum liberty. Solutions that relied more on steering the testing grounds of the free-market towards reforms without the heavy boot of government regulation stifling innovation. Ideas such as Carbon Markets, which not unlike another “controversial” piece of legislation that passed a few years back, actually started from inside the conservative movement as a market-based alternative to more liberal policies. Conservatives would argue their case on its own merits, and trust the American people to decide for themselves which approach would bear the most fruit.

But that’s not what Republicans have done, is it? Instead, they’ve latched onto that one single, almost invisible paper and decided to use it as a hatchet to chop the negotiating table into kindling. Instead of laying out a solution to the problem in line with their ideals, they simply deny that there is any problem at all, then go about doing their level best to misinform the public, muddy the waters, and deny objective reality. They’ve abandoned their own ideas the moment it looked like they might actually become law and labeled them “liberal”.

And they expect you to be stupid and ignorant enough for it to work.

You see, many of the causes and policy positions that have been long associated with liberalism, if actively investigated, actually turn out to be very conservative. If taken at their word that public policies should be weighted to maximize individual liberty and minimize government power, a real conservative would support everything from gay-marriage, to marijuana legalization, to abortion rights. A real conservative would be appalled at the idea of a government big and powerful enough to define the limits of love placed on two consenting adults. A real conservative would recoil at the enormous expense of an utterly failed War on Drugs and the expansion of the police-state at the expense of personal liberty and privacy that has resulted. And a real conservative would take up arms against a government invasive enough to override the requests of a husband and force a dead woman’s heart to continue beating just to serve as an incubator, against her own express wishes.

That is not conservative. It is the Modus Operandi of the very types of people which the conservative movement formed to oppose. It’s time to come back to the real world, not the one the GOP wishes it could create. Some of us have been here all along.