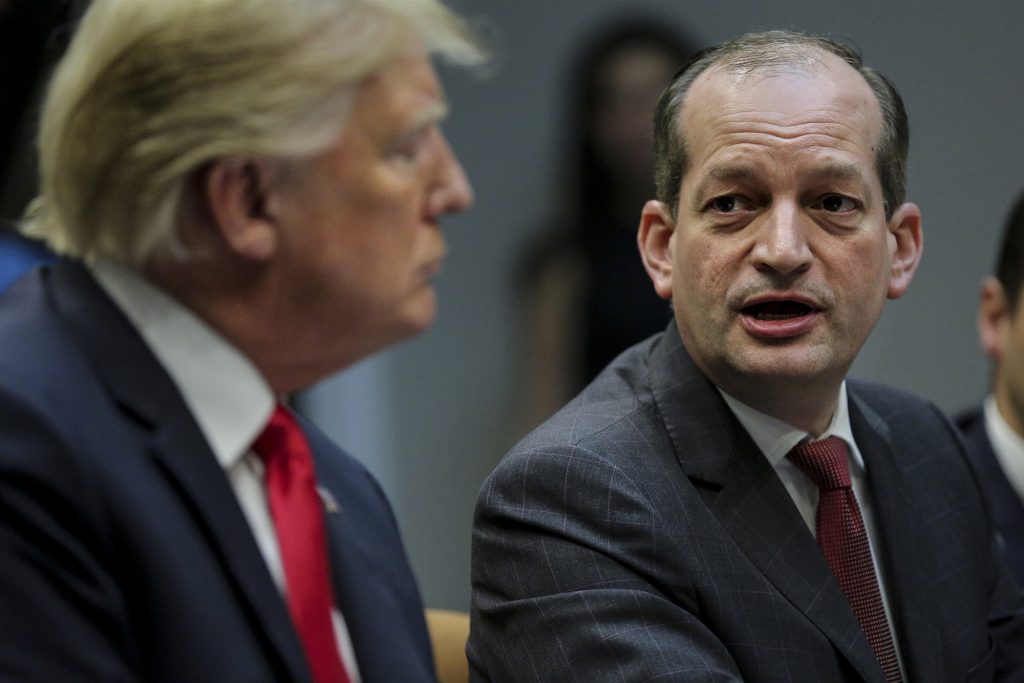 Yes, yes, Robert Kraft shelling out fifty bucks for a handy is hilarious, but a far more important sex trafficking scandal is going relatively unnoticed by the media. Read on and let’s see if we can change that.

At the conclusion of that case, Epstein was convicted of the reduced charge of solicitating a minor, when in reality he was running an underage prostitution ring involving dozens of victims of sex trafficking, many of whom he’d personally groomed through “recruiters” of similar ages and circumstances from underprivileged communities. But thanks to his plea deal with Acosta, Epstein served only 13 months in a county jail, during which he participated in a work-release program that allowed him to spend his daylight hours in his office, an arrangement sex offenders are supposed to be barred from.

But that’s not even the most outrageous, nor the most relevant part of the plea deal. No, really, it gets much worse. You see, part of the deal also effectively ended an FBI probe into Epstein’s child sex trafficking network that was trying to determine not only the identities of the victims, but the names of Epstein’s friends and customers who jointed in the conspiracy to rape dozens of girls. Even worse, these coconspirators were granted immunity from prosecution, effectively ending any legal avenues for law enforcement to bring anyone who participated in Epstein’s child sex trafficking ring to justice.

Why is that important? I’m glad you asked! But first, let’s talk for a moment about sweetheart plea deals. As we’ve already seen in the Mueller investigation, the reason for a competent prosecutor to offer a plea deal to a member of a conspiracy is to get them to turn state’s evidence against the bigger fish further up the chain. This is why Rick Gates is walking free without spending a day in prison, while his decades-long coconspirator, Paul Manafort, is facing the very real prospect of ending his life as a permanent guest of the federal correctional system (Manafort was Trump’s 2016 Campaign Manager/Chairman, incidentally). But Acosta’s deal did exactly the opposite. Instead of rewarding Epstein for flipping on the rest of the pedophile network he’d built, Acosta gave the man he was supposed to be prosecuting for raping children carte blanch to protect other men just as guilty as himself. Which brings us to the next point.

Donald J. Trump is an accused child rapist. Jeffery Epstein was named as the man who supplied Trump with girls to rape by one of Trump’s victims in a lawsuit that has since been pulled after she received death threats from Trump supporters, much as Stormy Daniels reported. In the lawsuit, the plaintiff alleged Epstein arranged several sessions during which Trump violently raped her while she was tied to a bed, begging him to stop. 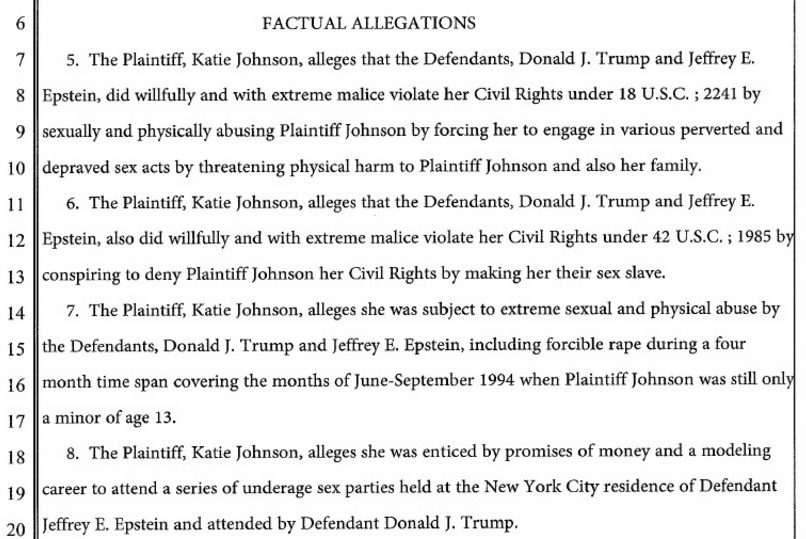 An excerpt from the complaint against Trump/Epstein

If that sounds out-of-character for The Donald, I won’t direct you to his infamous Access Hollywood “Pussy-grabber” tape we’re all aware of, I’d direct you instead to the testimony of his first wife, Ivana Trump, who during their divorce proceedings (while Trump was already fucking wife #2, incidentally) testified that Donald attacked her in a rage after a botched hair replacement surgery. According to Ivana’s deposition, Donald ripped out clumps of her hair in revenge as a prelude to raping her as punishment for referring him to the surgeon who screwed up his hair implants.

Where were we? Oh right, Trump has been credibly accused of being a rapist by multiple women of varying ages and socioeconomic backgrounds across decades of his life. Oh, but it doesn’t actually stop with Trump’s personal perverse proclivities, you know it doesn’t. A man like Trump experiencing the thrills of Epstein’s child sex trafficking empire firsthand couldn’t help himself but try to expand on it.

Still with me? Cool, so it probably won’t come as a surprise the dude who bragged about sneaking around backstage at the Miss Teen USA pageant that he owned while underaged girls were in various states of undress just because he could also ran a modeling agency that was forced to shut down under growing accusations of sex trafficking, primarily from former Soviet block countries where, TOTALLY COINCIDENTALY, Trump’s 3rd wife and current FLOTUS (who he was fucking before divorcing wife #2, whom he’d been fucking before divorcing wife #1) just happens to hail from under a journey through the US immigration system that still hasn’t been adequately explained. Because that also happened. Jesus Christ, I’m getting tired.

So what have been Trump’s public statements about his good friend Jeffery Epstein? I swear to whatever Gods you believe in, I’m not making this next quote up:

“I’ve known Jeff for fifteen years. Terrific guy. He’s a lot of fun to be with. It is even said that he likes beautiful women as much as I do, and many of them are on the younger side. No doubt about it, Jeffrey enjoys his social life.”

Still here? Sweet. At this point, the sharper among you are probably asking what happened to the “prosecutor” who gave a sweetheart plea deal to a pedophile who demanded not to flip on anyone more powerful than him as a condition of the arrangement? Haha! Funny story, Alex Acosta is sitting on Trump’s Cabinet as the Secretary of Labor. Going to spell it out for the slower people reading this. If you think it’s coincidence a billionaire convicted of sex crimes just randomly ended up getting an asinine level of leniency from a federal prosecutor who was later rewarded with a Cabinet position by one of said billionaire’s alleged billionaire pedophile customers, well, you’ve probably never mastered tying your own shoes.

Which leads me to my next question. Why in the hell is this obvious complicity and collusion between Acosta, Epstein, and Trump over child sex trafficking not the top story on every legitimate news outlet today? As you can see from the extensive sourcing above, everything I’ve said in this post is not only true, but has been part of the public record for months and in many cases years.

Every political journalist worth their salt should be able to rattle off the contents of this post from memory. So where’s the story being told? It used to be that journalists would lay out all the facts and trust their audience to draw their own conclusions.

But today, either out of misapplied dedication to impartiality, fear of losing access, or having been cowed by Trump’s “FAKE NEWS” drumbeat, journalists and pundits seem determined not to connect the dots, specifically for fear of the conclusions their audiences will naturally draw. It has only been recently, almost three years after Trump publicly asked Russia to steal Hillary Clinton’s emails, that the media is finally knocking around words like ‘treason,’ and ‘Russian asset,’ despite those terms being the only and inescapable descriptions of his public behavior from that moment forward.

How much longer before someone in the media starts calling Trump not just a traitor, which he unequivocally is, but also a sex trafficker and child rapist? This doesn’t require any imagination, only courage and the acceptance of facts already in the public domain, often unearthed by their colleagues, but not yet assembled into a narrative whole. It’s almost as if the obvious truth is too terrible to contemplate; that a sexual predator working either directly or indirectly on behalf of Russian interests stole the Presidency. It sounds like the backflap of a hack Cold War era pulp thriller, a plot so outlandish that most readers would throw it across the room before halfway through and would only pick it up again to drop it in the trash can. But based on everything we now know, it is self-evidently true.

And if we have any hope of rectifying this horrifying state of affairs, we need to accept what is right in front of our faces, because our collective incredulity, especially on the part of the 4th Estate, is exactly why this asinine plot succeeded in the first place.

P.S. The Jupiter, FL “massage parlor” Robert Kraft was busted soliciting prostitutes at is less than 20 miles from Mar a Lago.