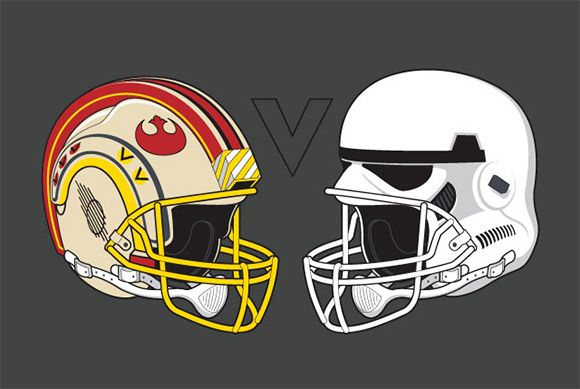 With another Super Bowl Sunday upon us, my social media feeds are again reminding me of the truly bizarre, self-imposed wall that exists between so much of nerdom and sports.

I am a massive nerd. I am also a massive football fan.

These are not contradictory stances. One does not exclude you from being the other. Growing up in WI, it was simply assumed that one was a Packers fan. It’s a religion up here, something that binds us all together and helps to get us through not only the long winters, but family gatherings that would otherwise be incredibly awkward. During football season, we didn’t bother playing D&D on Sundays, because the elven ranger, dwarven defender, and halfling rogue were ALL watching Brett Favre. That’s just the way it was, and still is.

So it was truly  striking and alien to me when I started traveling to cons throughout the country to see the dismissive, outright hostile attitude so many geeks display towards anything pro-sports. There are those among our community that actually take pride in their complete, self-enforced ignorance of what are the most popular passtimes in our society.

This attitude is the antithesis of everything I understand being a nerd to mean.

Let me tell you something about being a geek, maybe the best part, actually. Being a geek means not having to be embarrassed about the things that you love. It means you can shout your enthusiasm from the rooftops without caring what the mundanes think about it. It means being part of a community that doesn’t judge you for your over-the-top devotion to the strange, the off-beat, the obscure.

So why do some of us think it’s okay to be so dismissive, even antagonistic towards the love of things slightly more mainstream? I have a secret; sports fans are some of the biggest geeks out there. You want endless lists of stats to memorize? They have you covered. Merchandise to collect? Done. Throngs of rabid fans who will sit out hours or days in freezing temperatures for tickets? Honey, you have no idea. Cosplay? Have you seen a Buffalo Wind Wings on game day?

They’re no different, and no better or worse, than the rest of us. Sure, the guys huddled around their laptops in the sports bar drafting their fantasy team may not recognize the parallels to a basement full of guys rolling character sheets, but they’re still there. So stop pretending there are different strata of geekdom, or that some types of nerdiness are less legitimate than others. That reeks of the same type of arrogant elitism and entitlement that so many of us chaffed under back in school.

I am a geek about many things. I wear my Packer Superbowl XLV hat as proudly as I display my One Ring armband tattoo. And that’s okay.

This is not to say that nerds shouldn’t have opinions about sports, even negative opinions, about racist team names, or drug abuse, or concussion scandals, or the scourge of domestic violence. Absolutely you can, and should voice your opinions on these issues to try and shape the culture of professional sports and their impact on our society going forward.

But don’t pretend that remaining deliberately ignorant of a thing somehow makes you better or more enlightened than those who embrace it.

When is that ever true?