As an author, my belief in the power and necessity of freedom of speech and of the press is unshakable. It is the foundational human right, without which, none of the rest are possible.

As a comedian, I hold that nothing is can be out of bounds or off limits. Nothing can be immune from satire and criticism. You get the juiciest burgers by grinding up sacred cows.

So when I heard the news that earlier today, twelve people were executed by extremists at the Paris offices of the satirical newspaper “Charlie Hebdo” for the “crime” of satirizing the prophet Muhammad, well, my anger nearly boiled over.

My heart goes out to those we lost in France today, writers and comedians in their own right, as well as the police officers who fell doing their duty.

I want one thing to be clear before I go further. We in the free world are not at war with Islam, or Muslims in general. Muslims are our neighbors and friends. They work alongside us at our jobs, fight alongside us in our military, and yes, mourn alongside the survivors of this senseless act of violence.

Instead, we are at war with the people, of any religion, ideology, or movement, who are so fearful, so cowardly, and so insecure in their beliefs that they would commit murder to silence even the most banal criticism.

Stephane Charbonnier’s murderers wanted to buy his silence with bullets. Moreover, they want us all to become accomplices to their atrocity through self-censorship enforced by fear.

Which is why I’m sharing this image, because seriously, fuck you guys: 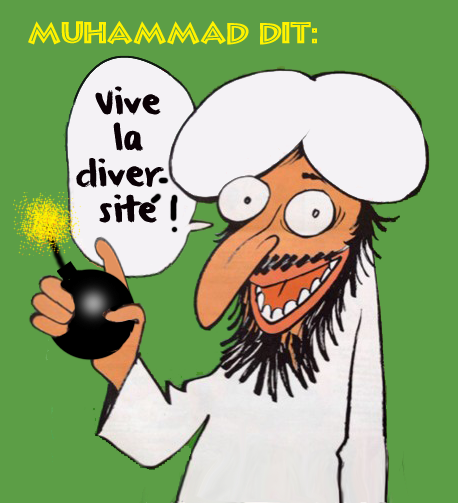 This cartoon originally appeared in “Charlie Hebdo”. Translated, it says “Long Live Diversity.” And while I’m sure the irony of this act of terrorism only confirming the sentiment the cartoon portrays will be lost on the murderers, I’m confident it isn’t lost on the millions of people looking in from outside of their poisonous ideology.

It is my hope that the French authorities capture those responsible swiftly and without any further loss of life, unless of course one of the perps gets plugged while resisting arrest.

Update 6:30 CTS: It’s just been announced that the French police have found the three suspects in the Charlie Hebdo shooting. One of them was killed in the encounter, while the other two have been captured. My only regret is that France phased out the guillotine. Also, it’s come to my attention that the image I posted earlier was actually a photoshop manipulation of a controversial Charlie Hebdo cover, the original of which you can view here. Also, I was inspired to draw my first and maybe only political cartoon: 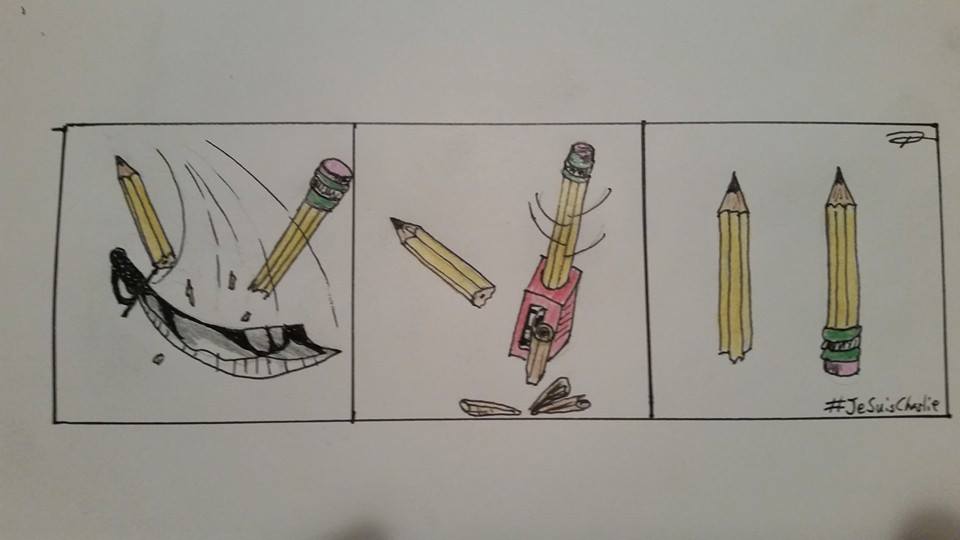 Straight lines is really all I can do.