Welcome Back to Jurassic Park 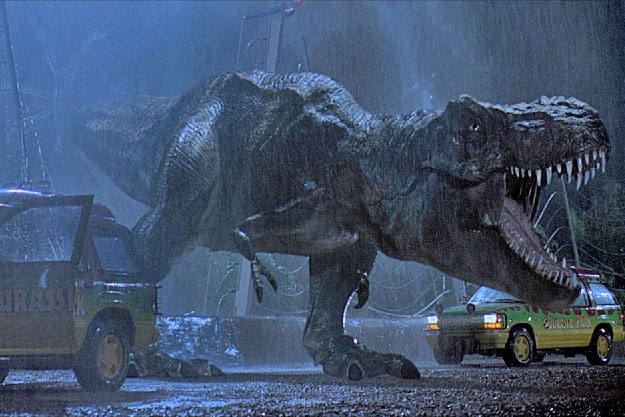 So last night I went to the Milwaukee Public Museum and watched Jurassic Park in the big ass dome theater. I last saw it in the theater back when it premiered in 1993. I was thirteen years old surrounded by my mom and my nine-year-old brother. We didn’t breath for the last half of the movie.

Twenty-one years and a whole lot of life later and the movie still holds up amazingly well. Stan Winston’s creature effects are as good today as anything going. The scene when the T-Rex breaks out of the fence in the rain and attacks the Explorer with the kids in it is still TERRIFYING. The sound of that monster roaring is still enough to trigger the lizard part of my brain to start screaming to get the fuck out of there. Just run.

Jurassic Park was, in many ways, the very height of special effects work. The CGI was adequate, but used sparingly. The close-in shots were still all practical effects. Including a 40 ft long T-rex robot that weighed 9,000 lbs. This had two huge advantages. First, your brain knows it’s a real object. No matter how good CGI gets, it’s still on the wrong side of the uncanny valley and your brain knows it. There’s a difference between knowing something is CGI fake, and knowing something is a fake robot, but still a real object.

The second advantage is the performances you get out of your actors. Sam Neil wasn’t looking at a dot on a green screen when the Rex blew his hat off with Spielberg telling him to act intimidated. He was looking at a fucking T-Rex with an air cannon in its nose that actually blew his hat off. He didn’t have to act, because his hind brain was busy throwing out all sorts of interesting signals and hormones because it knew that gigantic toothy thing in from of him was real, and presented a real danger. Same with the kids. They weren’t so much acting as they were having the living shit scared out of them for money in a way that may have verged on child abuse.

And THAT’s what I want to see out of Hollywood again. Not these overblown CGI fests that have to constantly up the ante on action instead of relying on authenticity to get their thrills. Jurassic Park only had fifteen minutes of actual dinosaur footage in its two hour run time, but they were some of the best and most memorable fifteen minutes in action film history. It was a perfect blend. CGI when absolutely necessary because practical effects would be impossible, then models and animatronics for everything else.

That is how you’re going to break through people’s cynicism and get them back into theaters, for the sort of experience you simply can’t replicate at home, no matter how big your TV or how many watts your sound system.

Personally, I cannot wait for Jurassic World. I just hope they bring back the robots.