Of Cattle and Conservatives (Inevitable Update)

So yet another week and news has come to light the our good friend and five-gallon hat model, Cliven Bundy has found his way back into the spotlight to grab another fifteen minutes of fame.

Last week, I wrote a lengthy tirade about Mr. Bundy and his gun-brandishing friends. I received a fair bit of flack in private conversations over several comments therein, and I’d like to address them directly. Firstly, I was called out for this line:

“Make no mistake about it, these people came with the intention of starting a war, the very “Second Amendment Solution” that has captured the hearts and imaginations of a certain shrinking demographic since they looked around and saw all these colored folks in positions of authority and queers destroying the traditional family, or whatever.”

The complaint was a simple one that, on the surface, had some merit. The person in question felt that it was unfair of me to paint the entire “conservative” movement with the broad brush of racism and homophobia, and that it was perfectly possible to side with Bundy over grazing permits and public land use issues without also being a racist, homophobic fuck.

This is true insofar as it is technically possible, but really, how likely is it? Mr. Bundy’s now infamous tirade about the “Negros” is instructive and really helps to validate my initial characterization of the average character of the people who are attracted to his cause. Not all rectangles are squares, but all squares sure seem to be rectangles. After years of courting the angry old white man demographic and doing everything possible to paint any sort of social progress and expansion of equality as government overreach and persecution, why is anyone surprised that all the racists seemed to have funneled themselves into one corner of the political spectrum?

And really, is anyone at this point surprised that Mr. Bundy thinks black people were happier as slaves? He hasn’t paid to feed and water his cattle in twenty years, do you really think he wants to pay his workers?

The second issue I was taken to task over was my characterization of the armed “protesters” who arrived to intimidate federal authorities as domestic terrorists. Especially in light of the fact that I am not only a gun owner and Concealed Carry Permit holder, but because I have, in times past, protested while carrying a gun myself.

This is completely true, I have attended protests while carrying a firearm. However, context and behavior is everything in this case. A number of years ago gun owners here in WI were facing harassment from Law Enforcement Officers for openly carrying side-arms in public. It is important to understand that at the time, open-carry was perfectly legal in WI. The owners involved had broken no laws, and had threatened no one.

Yet in any number of incidents, the police were called in to harass and even arrest them on trumped-up or entirely invented charges. It got so bad that at one point, the state Attorney General wrote a letter to state Law Enforcement Agencies forbidding them from harassing gun owners who were otherwise obeying the law. During this time, I carried a handgun openly and attended several “sit-in” type demonstrations with a copy of the AG’s letter in my back pocket. We had several challenging, even tense conversations with LEO’s during these events, but ultimately the point sunk in and the harassment stopped.

What none of us did was some stupid shit like this fucking asshole: 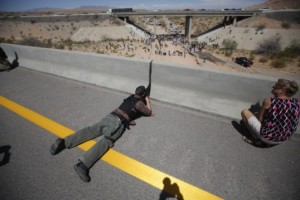 That’s a man named Eric Parker from Idaho. He is not a peaceful protester. He is pointing a high-powered rifle downrange from a position of cover. He is a threat to the safety of every LEO and civilian in the area. Pointing a muzzle at other people is not protected speech under the First Amendment. It is dangerous, awful gun-handling, and illegal. He should be arrested, and he’s lucky he wasn’t shot by a real sniper.

This wasn’t a protest about Second Amendment rights where the presence of guns would make sense as symbolic instruments. The militia showed up not to protest peacefully as is their right under the First Amendment, but to threaten and intimidate LEO’s with the promise of deadly violence.

If ANY of the people who had been at our sit-ins in WI had pulled their gun and pointed it at ANYONE, we would have fed them to the police ourselves, because that sort of publicity would be simply devastating to the image of gun owners and the chances of our cause being properly understood by the public, not to mention being stupid and illegal. That is the difference.